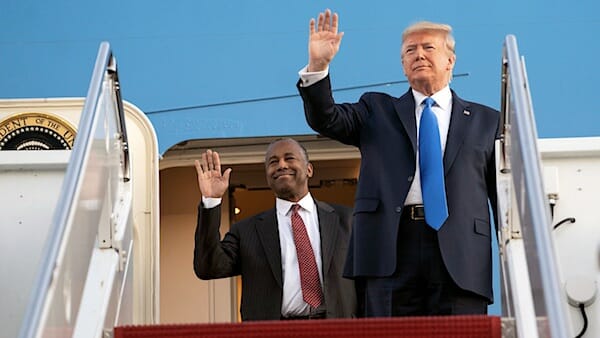 Assuring the nation that it will "get through this," Dr. Ben Carson said Tuesday that two coronavirus treatments change the landscape of the pandemic within the next couple of weeks.

Carson, a renowned neurosurgeon who now serves as secretary of Housing and Urban Development, told SiriusXM’s Breitbart News Daily with host Alex Marlow that progress on two treatments has been rapid.

One is a plasma treatment that uses antibodies from people who have recovered from the virus. The other combines the drugs hydroxychloroquine and azithromycin.

Carson said the plasma treatment gives patients "a jumpstart on fighting this."

On Sunday, the Food And Drug Administration issued an emergency authorization for prescribing hydroxychloroquine and azithromycin while clinical trials are underway.

Carson said the combination of the two drugs showed promise in China, where the virus emerged, and in a French study.

The FDA approval for use during clinical trials is a departure from past practices, he noted.

"I think that’s the wise thing to do because the risk of doing nothing are so high in this particular case," he said.

Are you satisfied with President Trump's overall handling of the coronavirus battle?
97% (343 Votes)
3% (9 Votes)

The trials could show results in weeks not months.

"We'll know that very shortly, in the next week or two," Carson said.

He said the "energy that is being put into this is phenomenal and the FDA has been looking at things and very quickly making decisions."

"These are the kinds of things that will mitigate this situation."

He advised people not to wear N95 surgical masks because they are needed to medical workers who are "on the front lines fighting and risking their lives every day."

People who are sick should wear the common fabric mask to keep from infecting others, he said.

Testing for the coronavirus also is advancing, he said.

"A lot of progress has been made on the testing and now there are some new tests that are going to be widely disseminated and which you can get the answer in a matter of minutes not days," Carson said. "That makes a huge difference."

He's optimistic about the future.

"The big message is this will pass," Carson said. "We will get through this."