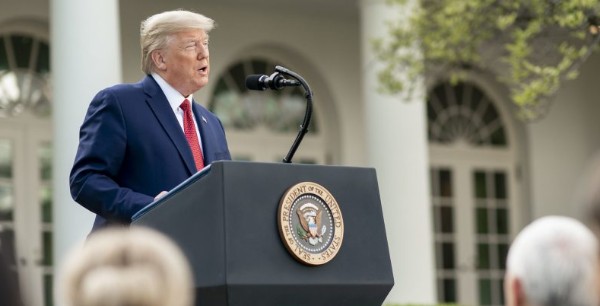 Does President Trump have the authority to halt U.S. taxpayer funding for the World Health Organization?

Trump, alleging the WHO collaborated with China's cover-up of the spread of the coronavirus pandemic, has suspended the $400 million payment to the U.N. agency while an investigation takes place.

Andrew C. McCarthy, a former assistant U.S. attorney, said in a National Review column he believes Trump has the power, but "it's tricky."

"The simplest route is to repurpose the congressionally authorized funding," he wrote.

McCarthy noted that Trump reprogrammed some Defense Department funding for the purpose of border-wall construction.

He said presidents have particular leeway in appropriating funds during a national emergency.

"Recall that there are many emergency provisions in federal law, some going back decades, through which Congress has given the president spending discretion," McCarthy argued.

But the "surest way to cut off the WHO and make it stick is to shift the appropriated WHO funding to COVID-19 relief for the states," he said.

"They are stressed by the outbreak and pleading for more federal dollars," he reasoned. "For all the bellowing Democrats are doing today about the prospect of cutting off the WHO, they'd have a hard time protesting additional funding for their states and districts."

He noted that many Democrats are being careful not to defend the WHO. Instead, they have charged that Trump is attempting to scapegoat the WHO for his own failings.

Under federal budgetary law, the president can ask on a fast track for appropriated funding to be rescinded. He must explain why, describe the impact and then give Congress 45 days to act on the request.

If Congress failed to act, the president would be required to spend the funding as Congress directed.

Congress could also draft its own legislation on a fast track.

But it would be necessary in the case of any congressional action for lawmakers to be physically present and to come to a consensus.

"Neither of these is a sure thing at the moment, to say the least."