It wasn’t long into his conversation with George Papadopoulos at a prestigious social club in London weeks before the 2016 election that FBI confidential informant Stefan Halper mentioned his links to several retired Russian spies.

“I have a lot of friends in Russia,” Halper told Papadopoulos during their conversation, which occurred over drinks, and which the FBI recorded.

“My point is that,” Halper said, “the Russians can be very helpful to us at this time and we’ve got some great information coming out.”

Halper, a former Cambridge professor, rattled off the names of the Russians, Vyacheslav Trubnikov, Leonid Shebarshin, and Yuri Traughtoff, according to a transcript of the secretly recorded conversation released on Thursday.

Halper was not bluffing about his friendship with at least one of the ex-Russian spies. He has collaborated with Trubnikov, the former head of Russia’s foreign intelligence service, the SVR. Halper hosted Trubnikov at two intelligence seminars at Cambridge in 2012 and 2015, and interviewed the former Kremlin insider for a 2015 study on China-Russia relations he did for the Pentagon’s Office of Net Assessment (ONA).

Halper’s goal in bringing up his Kremlin links was to get Papadopoulos to reveal whether he or the Trump campaign were working with the Russian government or involved the WikiLeaks release of Democrats’ emails, according to the Justice Department inspector general’s (IG) report on the FBI’s Trump-Russia probe.

“You know this stuff out of WikiLeaks is really superb,” Halper said.

In a virtually unprecedented move, Senate Judiciary Committee Chairman Lindsey Graham released the newly declassified transcript on Thursday as part of a GOP-led effort to publish documents related to the FBI’s Crossfire Hurricane investigation. Two other Republican senators have released declassified information over the past week that shows that the FBI had evidence that the infamous Steele dossier was based on Russian disinformation.

The FBI had opened a counterintelligence investigation on Papadopoulos and several other Trump campaign aides on July 31, 2016, shortly after WikiLeaks released emails stolen from the DNC.

As part of the Crossfire Hurricane investigation, the FBI turned to Halper, a seasoned political veteran of three Republican administrations who had been a confidential human source (CHS) for the bureau since 2008.

The FBI used another CHS to surveil Papadopoulos before the campaign. The Daily Caller News Foundation published a transcript last week of that spy effort, in which a friend of Papadopoulos tried to pry information out of him during a four-hour lunch and casino visit just before Halloween 2016.

The Justice Department IG’s report said that Halper agreed “without any hesitation” to help the FBI with the probe when he was approached about it on Aug. 11, 2016. Halper’s FBI handler told the IG that investigators decided to lure Papadopoulos from the U.S. to the U.K. in hopes he might be relaxed to discuss any nefarious activity involving the Trump campaign.

They also sought to recreate the conditions of another encounter that Papadopoulos had in London several months earlier, the IG report said. The young Trump aide, to whom the FBI gave the nickname “Crossfire Typhoon,” allegedly told Australian diplomat Alexander Downer over drinks that Russians might have information on Democrats that would help the Trump campaign.

The Australian government shared that tip with the FBI in late July 2016, just after WikiLeaks released the DNC emails.

After the FBI brought Halper into the Crossfire Hurricane investigation, the 70-something-year-old operative met with and secretly recorded Carter Page, another Trump foreign policy adviser, on Aug. 20, 2016, according to the IG report. He met Sam Clovis, a Trump campaign official, on Aug. 30, 2016, but did not record that conversation.

Halper reached out to Papadopoulos on Sept. 2, 2016, to offer to fly the Trump aide, whom he had never met, to London to discuss writing a paper on energy issues for $3,000.

Papadopoulos has said he agreed to the offer and met Halper in London, along with a woman the professor claimed was his assistant, Azra Turk.

Halper and Papadopoulos met twice on Sept. 15, 2016, once for brunch and a second time for pre-dinner drinks.

The IG report says that in the first meeting they discussed details of the research paper Papadopoulos had agreed to write. The FBI team decided to set up a second meeting so that Halper could ask Papadopoulos “direct questions about whether the Trump campaign benefitted from, or anyone in the Trump campaign had knowledge of, Russian assistance or the Wikileaks release of information that was damaging to the Clinton campaign,” according to the IG report.

Papadopoulos shot down Halper’s questions about WikiLeaks and Russian help for the Trump campaign, the transcript shows.

“No one knows what he’s going to release,” Papadopoulos said of WikiLeaks founder Julian Assange. He said that Assange might release information about Trump as a “ploy to basically dismantle” and “undercut” the Republican.

Papadopoulos also said that the Trump campaign would not engage in “this type of activity because at the end of the day it’s…illegal.”

“This is a form of treason.”

The transcript jumbles the names of the ex-Russian spies Halper mentioned, but enough context is provided in the transcript that two of them can be identified from open source records.

“One of them is, ah, Slava Truvnikoff. Do-do you, do you know Truvnikoff? Truvnikoff was the director of the KGB and the FSB,” said Halper, referring to Vyacheslav Trubnikov, the former head of Russia’s SVR. 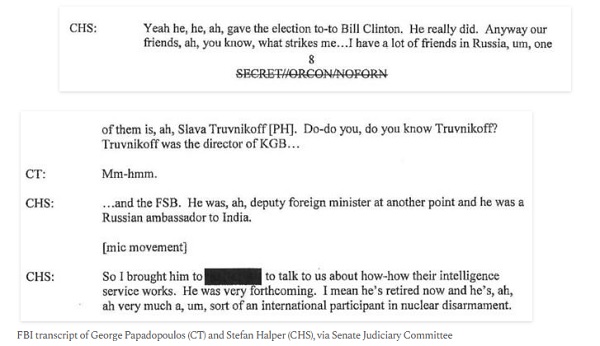 Halper told Papadopoulos that he hosted Trubnikov at an event to discuss Russia’s intelligence operations.

“So I brought him to [redacted] to talk to us about how-how their intelligence service works,” Halper said. “He was very forthcoming. I mean he’s retired now and he’s, ah, ah very much a, um, sort of an international participant in nuclear disarmament.”

Halper hosted the spy in 2012 and 2015 at the Cambridge Intelligence Seminar, which he convened alongside Sir Richard Dearlove, the former chief of MI6. The DCNF has previously reported that Halper interviewed Trubnikov for a 2015 study he conducted for the Pentagon’s Office of Net Assessment (ONA).

While Halper was serving as an FBI informant, he inked $1.1 million in contracts with ONA for four studies on geopolitical events in Russia, China, and India. His offer to Papadopoulos closely matched his pitch to scholars for those studies, in which Halper paid scholars a small honorarium for analysis of geopolitical issues.

Halper told Papadopoulos that he had “developed a friendship with a really senior KGB general.” The transcript spells the general’s name as “Shebasheen,” but other information provided by Halper suggests he was referring to Leonid Shebarshin, who led the KGB for two days in the early 1990s.

He also said he knew a KGB officer identified in the transcript as “Yuri Traughtoff.” The transcript notes that the spelling of the name may not have been accurate, and the DCNF was unable to determine who Halper was talking about.

Halper’s attorney did not respond to a request for comment about the transcripts.

Halper became an FBI informant in 2008, and had a brief falling out with the bureau in 2011. The IG report said that Halper was shut down as a confidential human source in 2011 because of “aggressiveness toward handling agents” that arose out of a dispute over his compensation as a CHS.

Halper also was sidelined because of “questionable allegiance to the [intelligence] targets” with whom he maintained contact, the IG report said.

The report does not identify the intelligence targets, or suggest that they are the Russians that Halper mentioned to Papadopoulos.

Trubnikov has been name-dropped in other conversations related to the Trump probe.

Steele, the former British spy and dossier author, told a State Department official during an Oct. 11, 2016 meeting that Trubnikov was a source of some sort for the dossier. Steele relied on a single source to collect information from a network of contacts inside and outside of Russia. Many of the sub-sources are believed to have unwittingly provided information to Steele’s intermediary.

The IG report blasted the FBI for failing to disclose the potentially exculpatory information that both Page and Papadopoulos shared with Halper.

The FBI failed to tell the Foreign Intelligence Surveillance Court (FISC) about Papadopoulos’s denials to Halper that the Trump campaign was working with Russia. Carter Page had told Halper that he had never met Trump campaign chairman Paul Manafort, but the FBI failed to share that information with the FISC. It was a key claim in Christopher Steele’s dossier, which the FBI cited extensively in applications to obtain surveillance authority from the FISC to spy on Page.

Halper’s FBI handler, Stephen Somma, is identified as one of the main villains in the IG report. The report cites the counterintelligence veteran as being “primarily responsible” for some of the “most significant” errors in the Crossfire Hurricane probe.

Somma failed to disclose the exculpatory information related to Page and Papadopoulos, as well as information from interviews with Steele’s main source, who disputed many of the allegations from the dossier. Somma was also aware by mid-August 2016 that Page was an “operational contact” for the CIA, but he did not disclose it in applications to the FISC.

Somma insisted to the IG that an encounter that Halper had with Page several weeks before the start of Crossfire Hurricane was a coincidence. Halper first met Page on July 10, 2016 at a Cambridge event centered around the presidential campaign.

The FBI transcript indicates that Halper arranged dinner for Papadopoulos and Arza Turk, the woman he falsely claimed was his assistant. The New York Times has reported that Turk was actually a government investigator operating under a pseudonym.

The transcript shows Halper and Papadopoulos exchanged farewells, with Halper saying he would like to help the Trump campaign as an outside adviser on foreign policy issues.

Crossfire Hurricane continued to rage for months after the London meeting, though Halper himself was spent for the night.

“I’m three sheets to the wind,” he said into his hidden microphone.