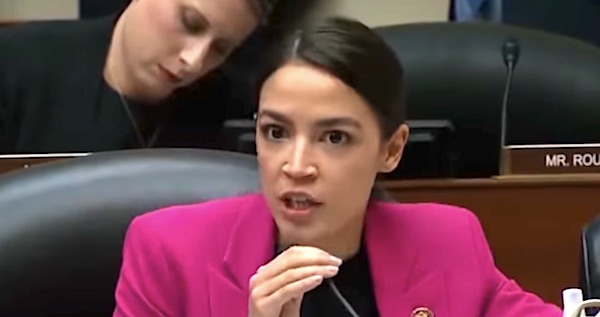 Congress has been focused on the coronavirus crisis, already allocating trillions of dollars to help stabilize the economy while considering ways to hold China accountable for the pandemic.

But socialist freshman Rep. Alexandra Ocasio-Cortez, D-N.Y., has something else on her mind.

In a promo for the VH1 series, she pledges allegiance to the "revolution."

The Gateway Pundit blog reported the preview for the Tuesday episode refers to Ocasio-Cortez as "the judge America needs right now."

The show features RuPaul's search for "America's next drag superstar." RuPaul plays the roles of host, mentor and head judge as contestants are given various challenges each week.

The congresswoman is an "avid fan" of the series, having said that appearing on the show was her "dream."

"I pledge allegiance to the drag," she says in the promo.

Get rid of wealth

In February, she advocated for the eradication of the ultra-rich.

"Billionaires should not exist," she said of the creators of jobs and wealth for millions of Americans.

Ocasio-Cortez regularly has created headlines that have caused grief for her party.

For example, she said her party's impeachment campaign against President Trump was based on fear that their candidates could not defeat him in the 2020 election.

She's made many wild claims, such as that "the world is gonna end in 12 years if we don't address climate change."

She wants trillions of dollars spent on her radical "Green New Deal."

The Washington Examiner described her comment as an admission "that the Democrats' efforts to investigate President Trump are, in part, meant to prevent him from winning reelection in November 2020."

Her career in Congress has been littered with controversy, including a tax warrant issued in 2017 against a children's books publisher she launched.

She also has compared her election victory to a moon landing, vowed to "run train" in Congress, was fined for campaign-finance violations and accused by Whoopi Goldberg of "pooping on people." She accused President Trump of being racist and announced she needed a self-care break.

And she said she wants more money than her $174,000 salary provides.

She also was schooled by an FBI agent on domestic terrorism.

During a hearing, she demanded that Wells Fargo CEO Timothy Sloan explain why his company was caging children. He patiently explained the company wasn't engaged in any such activity.

She's also wondered whether it's OK "to still have children" in light of the world "ending in 12 years."

And she convinced Amazon to cancel its plan for a second headquarters in New York City that would created 25,000 jobs.