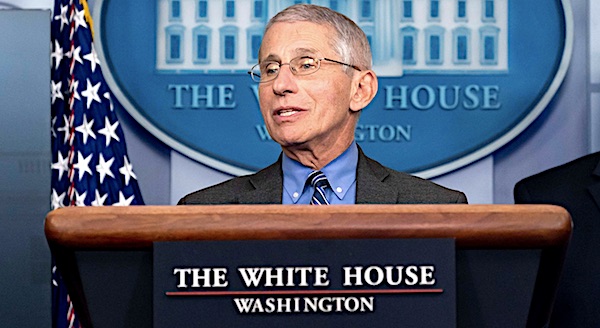 Dr. Anthony Fauci is among the onetime members of the Obama administration who must be held accountable for the $3.7 million the U.S. granted to China for coronavirus research in 2014, contends Rudy Giuliani.

Some of the money went to the Wuhan laboratory in which the coronavirus pandemic is believe to have originated.

The former New York City mayor, now personal legal counsel for President Trump, said in an interview Sunday with New York AM 970 radio's "The Cats Roundtable" that he would open an investivation if he were U.S. attorney.

Giuliani wants to find out what Fauci, who has served as director of the National Institute of Allergy and Infectious Diseases since 1984, knew about what was going on in the Wuhan laboratory when the grant was made.

The U.S. intelligence community believes the current coronavirus strain may have accidentally escaped from the Wuhan Institute of Virology.

Giuliani suspects China was experimenting with viruses at the lab for the purpose of "weaponizing them." He said the U.S. was prohibited from giving any money to any laboratory "that was fooling around with these viruses."

"Despite that, Dr. Fauci gave $3.7 million to the Wuhan laboratory — and then even after the State Department issued reports about how unsafe that laboratory was, and how suspicious they were in the way they were developing a virus that could be transmitted to humans."

"So, something here is going on, John. I don't want to make any accusations," he said. "But there was more knowledge about what was going on in China with our scientific people than they disclosed to us when this first came out.

"I mean, just think of it, if this laboratory turns out to be the place where the virus came from — we paid for it. We paid for the damn virus that’s killing us," Giuliani said.

If he were investigating, he said, he would pose a number of questions.

"I'd want to know what did we know? How much did we know about how bad the practices were there? Who knew about it? And who sent them money anyway? And that person would sure as heck be in front of a grand jury trying to explain to me — what are you asleep?"

The Washington Examiner noted it's unclear what oversight Fauci had in the funding decisions.

However, it was the National Institute of Allergy and Infectious Diseases itself that awarded the $3.7 million in grants to EcoHealth Alliance to study the "risk of future coronavirus (CoV) emergence from wildlife using in-depth field investigations across the human-wildlife interface in China" at wet markets.

Not all of the funding went to the lab in Wuhan.

The funding was brought up at a White House press briefing.

President Trump asked, "Who is president then, I wonder?"

The Examiner noted, however, that the funding was approved from 2014 to 2019, including $700,000 that was awarded under the Trump administration.