Yiddish phrases and terms such as "Jews" typed into Google's image search turn up anti-Semitic and racist caricatures from white supremacist and conspiracy websites.

The report showed results for Yiddish phrases such as "oy vey" and terms such as "Shoah," for the Holocaust.

After searching images.google.com with the term "oy vey," the first suggestions include "merchant," "shoah," "6 trillion," "shlomo" and "6 million."

MEMRI found many of the images yielded by the search originate on platforms popular with white supremacists and neo-Nazis such as 4Chan, 8Chan and Reddit.

Clicking on the images will direct the user to those websites.

One of the anti-Semitic images among the first search results for the term "oy vey," originally from the online forum Reddit, shows the popular white supremacist meme Pepe the Frog depicted as a Jewish caricature.

The text: "Knowing you would jew your own friends in a heartbeat."

The first suggestion for the term "merchant" is paired with a thumbnail depicting a popular anti-Semitic caricature of a Jew, called the happy merchant, or simply the merchant. 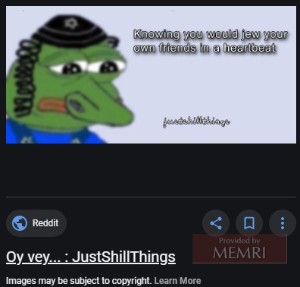 Clicking on the suggestion yields endless iterations of the anti-Semitic meme, MEMRI found.

One result is an image of the merchant character being sprayed with a can marked with a Star of David and the text "Jew-B-Gone."

The merchant is depicted as weeping and saying "Oy Vey! It's like second Shoah!"

The text on the bottom of the image reads: "Exterminates 99.99% of pesky rodents!"

The Google algorithm suggests similar images, including one titled "Backstabbing Jew." It depicts the merchant hugging another figure and brandishing a knife behind his back. 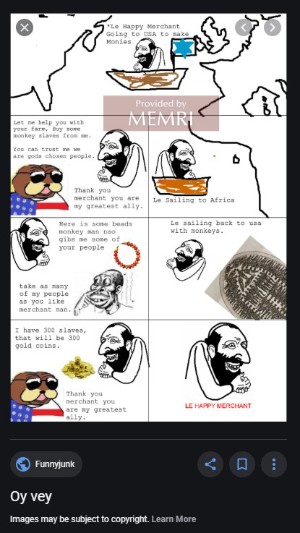 Another result in that search is a comic strip depicting the merchant brokering a trade of African slaves to the U.S.

Africans are also represented with a racist stereotype.

Another of the first results yielded by adding the suggested term "merchant" is a racist and anti-Semitic depiction of the Jew as slave trader.

One of the first images for Shoah, the Jewish Holocaust, is a caricature of a grotesque Jewish figure in a crematorium with a bag of money labeled "Your tax dollars."

Another image shows the merchant figure saying: "Oy vey I can't believe you want to gas six million more of my ancestors. Tis like anudda shoah."