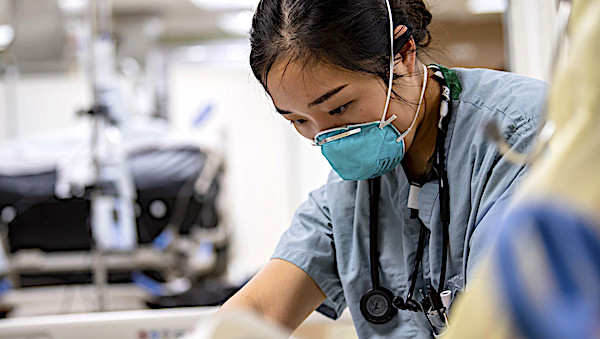 A federal government analysis concludes the "most likely" source of the coronavirus pandemic is a laboratory in Wuhan, China.

The analysis of evidence from open sources, which is still in progress, found all other possible places of origin have been proven to be highly unlikely, the Washington Times reported.

The preliminary report said there appears to be no smoking gun that would blame the virus on either the Wuhan Institute of Virology or the Wuhan branch of the Chinese Center for Disease Control and Prevention.

However, there is circumstantial evidence pointing to that conclusion.

China's initial explanation was that that outbreak originated from animals sold at a market for exotic meat in Wuhan.

The disease was in bats, then jumped to animals sold at the market, then to humans, China proposed.

Joint Chiefs Chairman Gen. Mark Milley has said the virus appears to be from a natural origin but the possibility of a lab leak is still being investigated.

"We don't know for certain," he said.

The government analysis obtained by the Times said the animal theory largely fails because the first human diagnosis of COVID-19  had no connection to the wet market. According to reports from China, no bats were sold at the market.

And further, China is clamping down on efforts to investigate whether the virus got loose from one of its labs, the report said. The communist regime has issued a "gag order" and put a military microbiologist in charge of the Wuhan Institute of Virology.

Both labs have done research on bat coronaviruses.

"Among the most significant circumstantial evidence identified in the report are the activities of Shi Zhengli, a leader in bat coronavirus research with the Wuhan Institute of Virology, China’s only high-security, level four research laboratory," the Times said.

"The document also points to a 2015 academic report in Nature Medicine by Ms. Shi and 14 other scientists who said that while researching the potential for bat coronaviruses to infect humans, 'we built a chimeric virus encoding a novel, zoonotic [animal-origin] spike protein … that was isolated from Chinese horseshoe bats,'" the Times said.

The U.S. government analysis found virus-carrying animals had been "sold as pets, dead laboratory animals were not properly disposed of, and lab workers were known to boil and eat laboratory-used eggs."

Chinese officials later changed their story about the origin of the virus, charging the U.S. Army or the CIA developed it and took it to China.

French officials, who helped China create its virology lab, said there's no evidence of a link to the lab.