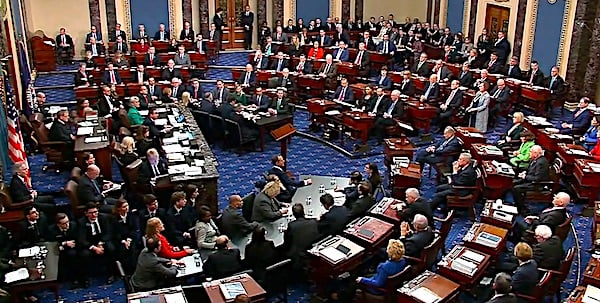 As governments around the world impose unprecedented restrictions on everyday life to combat the coronavirus, a warning is being issued.

The Council of Europe has issued guidance for governments across Europe on respecting human rights, democracy and the rule of law.

The organization's secretary-general, Marija Pejčinović Burić, has distributed the "toolkit" to government officials in all 47 member states.

"The virus is destroying many lives and much else of what is very dear to us. We should not let it destroy our core values and free societies," Buric said. "The major social, political and legal challenge facing our member states will be their ability to respond to this crisis effectively, whilst ensuring that the measures they take do not undermine our genuine long-term interest in safeguarding Europe’s founding values of human rights, democracy and the rule of law."

The document concedes the pandemic provides "formidable challenges" and "the regular functioning of society cannot be maintained."

But the infringements of rights "must be proportional to the threat posed by the spread of the virus and be limited in time."

"The virus is destroying many lives and much else of what is very dear to us," the guidelines say. "We should not let it destroy our core values and free societies."

The Council of Europe warns national governments and their officials that what they do now "will be assessed by the European Court of Human Rights in cases that will be brought before it."

The guidelines also require that "even in an emergency situation the rule of law must prevail … (which) includes not only acts of parliament but also, for example, emergency decrees of the executive, provided that they have a constitutional basis."

And any infringement of rights must be of "limited duration."

Extending the time for the emergency is a job for legislators and "an indefinite perpetuation of the general exceptional powers of the executive is impermissible."

"The right to life and the prohibition of torture and inhuman or degrading treatment or punishment belong to the core rights under the Convention as they cannot be subject to any derogation, even in time of public emergency such as COVID-19."

The organization promises to make every effort to help member states recognize rights and "maintain the democratic fabric of our societies."