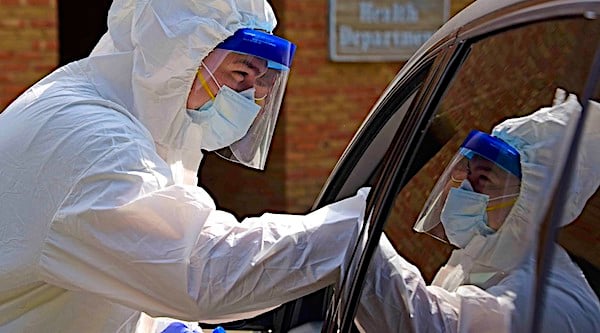 A Michigan judge has issued an order authorizing a county health officer and police to arrest and jail anyone they suspect of being sick with the coronavirus.

The order includes a blank line for the names of anyone arrested to be filled out later, said the Great Lakes Justice Center, which called the order unconstitutional.

Judge Mark Trusock of the 17th Circuit Court issued the order in response to a request by Kent County Health Officer Adam London.

The judge ruled that any "carrier and health threat" presented with a copy of his order "may be involuntarily detained by a peace officer, transported to and detained in an Involuntary Isolation Facility selected by the Health Officer for observation, testing, and/or treatment."

The judge further allows London to "instruct the Involuntary Isolation Facility to detain an individual until the CHT has been confirmed by a physician and the health officer to be without a fever of 100.4 degrees Fahrenheit for at least 72 consecutive hours (without use of fever reducing medication) and/or is otherwise non-symptomatic and meets the CDC criteria for release from isolation."

But GLJC insisted the order violates the U.S. and Michigan constitutions.

It quoted from the U.S. Constitution, where the Fourth Amendment states, "No warrants shall issue, but upon probable cause, supported by oath or affirmation, and particularly describing the place to be searched, and the person or things to be seized."

Michigan's constitution has a similar provision.

"The state cannot give the police and health authorities unrestricted power to arrest and force testing and treatment of a person or deprive them of their liberty without due process," GLJC said.

"Judge Trusock's order violates the constitutional rights of all persons in Kent County. The order is unconstitutional because it gives blanket authority to officials to arrest/detain any person without any court hearing or without any evidence establishing probable cause to support the detention."

The legal team explained Trusock cited Michigan law, 333.5207, which "only allows the detention of an 'individual' who the 'court has reasonable cause to believe' is a public health threat."

The judge's order doesn't identify anyone suspected of being a health threat, the center explained.

Instead, Trusock "unlawfully issued its decree against anyone who happens to be present in Kent County."

The law requires any health official or law enforcement officer seeking a detention to submit a "specific affidavit with specific allegations against a specific person."

"This order is unconstitutional, unlawful, and unenforceable. Any police officer or health official arresting or detaining a person under this illegal order is acting outside the scope of their legal authority and may face personal liability," the legal center said.

London had explained that he wanted police to have the authority to regard someone suspected of having the coronavirus who will not voluntarily isolate as "failing" to cooperate.

"Such individual can be transported involuntarily to and detained for up to 24 hours at any facility identified for such detention and/or treatment," he wrote.

London designated the county jail as the holding facility for people taken into custody.

He promised to inform the judge by email of any people he detains.