The unfolding globalist takedown of the world economy and concurrent natural phenomena such as locust plagues and earthquakes has stirred great interest in end-times prophecy and the Antichrist. This article offers some non-traditional perspectives on these topics from my own studies "de novo" (from scratch), using a first century perspective of Scripture without regard for established denominational doctrines.

I have this week begun publishing a book and video series titled "Dynasty of Darkness: Satan's long serpentine trail through human history in the role of successive Antichrists, and the imminent rise of his last days kingdom." I believe the "Antichrist" is whomever the demon Satan happens to be possessing at any given time, and there have been many. (You may request a free sample of the book and videos by email: [email protected].) 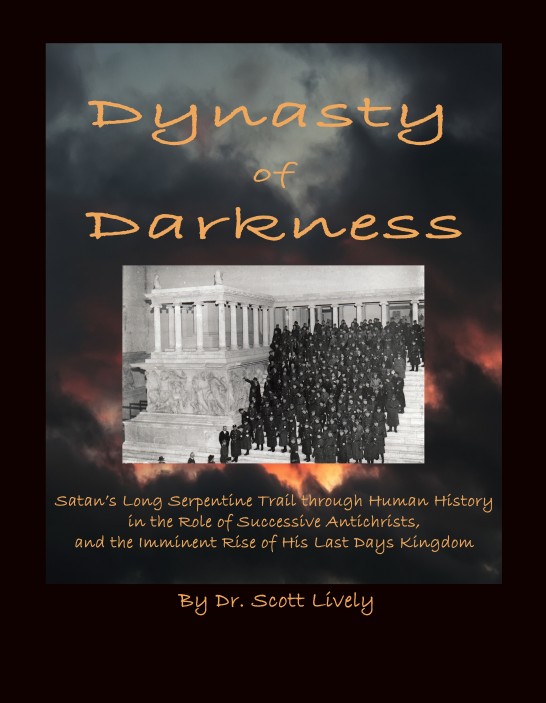 Antichrist means "anti-Messiah," the adversary of all who worship Yahweh (the salvation-promising God of the Bible), both Jews and Christians. Though most Jews do not acknowledge Jesus as Messiah (Christ), many Torah-faithful Jews will accept Him at the Second Coming (Romans 11:25-29). In the meantime, Jews are no less a target of Satan than Christians, and indeed were the exclusive target of the Antichrist Antiochus IV Epiphanus in the second century B.C. (Daniel 11) and the primary target of a famous modern Antichrist, Adolf Hitler, whose "Holocaust" of them literally means "burnt offering."

Of course, Christians will be the primary target of the imminent last-days Antichrist of Revelation, and we who are "in the light" of Christ should not let him take us by surprise (Matthew 24:4-8, 1 Thessalonians 5:1-6).

To that end we must search the Scripture for enlightenment. There we find that Satan is a finite, created being with limitations defined by God (Ezekiel 28:15). Though he has great power and an army of demonic angels at his command (Revelation 12:9), he can only be in one place at a time. He is NOT like an evil counterpart to the Holy Spirit with omniscience and omnipresence, but only "like a ravening lion seeking whom he may devour" (1 Peter 5:8).

However, his greatest weapon is the power to deceive (John 8:44) – which, when it takes the form of self-indulgent false doctrines and false religions such as (Marxist) Humanism (which most don't even recognize as a religion), enslaves vast numbers of people in self-harming and self-degrading beliefs and conduct – to the point that God gives them over to a "spirit of delusion" (2 Thessalonians 2:7-12). Satan's alluring and powerful lies thus operate like a deadly mind-controlling virus, spread by humans ourselves, magnifying his influence immeasurably.

How does possession work? In Job 1:7 we get a glimpse: "The LORD said to Satan, 'From where do you come?' Then Satan answered the LORD and said, 'From roaming about on the earth and walking around on it.'" This suggests that in their natural state, demons "roam" the earth in a disembodied form but through "possession" can "walk around on it" in a human host.

Jesus described this phenomenon in Matthew 12:43-45: "Now when the unclean spirit goes out of a man, it passes through waterless places seeking rest, and does not find it. Then it says, 'I will return to my house from which I came'; and when it comes, it finds it unoccupied, swept, and put in order. Then it goes and takes along with it seven other spirits more wicked than itself, and they go in and live there; and the last state of that man becomes worse than the first."

Job indicates that Satan takes possession of human hosts in the same manner as the lesser "unclean spirits" do. That host then becomes the literal embodiment (in-body-ment) of evil on the earth, the person we call the Antichrist.

The first message is to the king of Tyre as the Antichrist: "The word of the LORD came again unto me, saying, Son of man, say unto the prince of Tyre, Thus says the Lord GOD; Because your heart is lifted up, and you have said, I am a God, I sit in the seat of God, in the midst of the seas; yet you are a man, and not God. …"

The second message speaks "past" or "through" the king of Tyre to Satan:"Son of man, take up a lamentation upon the king of Tyre, and say unto him … You were the seal of perfection, full of wisdom, and perfect in beauty. You have been in Eden the garden of God … perfect in your ways from the day that you were created, till iniquity was found in you. …"

This plainly reveals this king of Tyre as the Antichrist of his time, possessed by Satan.

Now, if we accept that we are in the season of the end times, 2 Thessalonians 2 tells us that the last-days Antichrist is already on the earth, but hidden. Various names are touted as candidates, from the ever popular George Soros and Pope Francis, to the recently short-listed Bill Gates, but these don't fully fit the biblical criteria for the Antichrist in my view. IF, however, these world events truly are the "beginning of birth pangs" Jesus warned about, the real Antichrist will be revealed soon enough.

Scott Lively
Scott Lively is an attorney, pastor, human rights consultant and missionary with service in more than 50 countries. He is the author of seven books including "The Pink Swastika: Homosexuality in the Nazi Party" and "Redeeming the Rainbow," a textbook on pro-family advocacy he offers freely by email in PDF form by request to [email protected]
A pandemic of self-appointed control freaks
A constitutional amendment to prevent pandemic tyranny
Political money laundering: 'The big guy' always gets his cut
Dreams, doctrines and discoveries
The Cosby Conspiracy
See more...