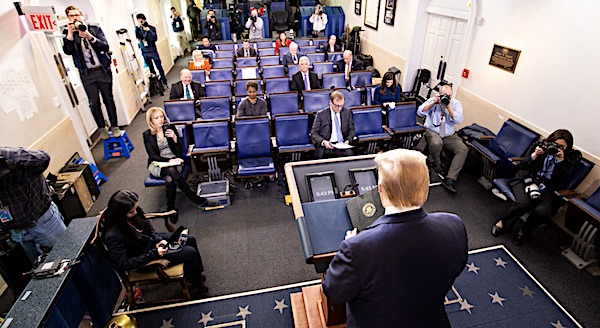 Lawyers have been given an often negative reputation by society. Maybe it's earned, maybe not. But lawyer jokes have been around forever.

One classic is, "What is a shipload of lawyers that sinks in the ocean?"

But now they're losing their place. The new subjects for the sometimes ribald, sometimes outlandish, and mostly funny stories are journalists. (Watch out for the R-rated ones on that link).

Twitchy, that aggregator of Twitter social media comments, has pointed out that #JournalistJokes is a new, and big, hashtag on social media.

"Full transparency, folks. At this point in the week, we’re just SO GLAD to write about anything other than the freakin' coronavirus. We realize it's the biggest story in the WORLD right now but we're guessing like us, dear reader, you could use a little break. And what better way to take that break than laughing … well, pointing and laughing at the media. Hey, they've earned it at this point, don’t you think?"

One example is, "Three journalists walk into a building. You'd think one of them would've seen it."

And, "Three journalists walk into bar and say 'ouch' – then write stories about how the bar is racist and phobic."

There are the typical ones about gigolos and prostitutes, which aren't repeated here.

But Dr Evil suggested, "How does a journalist change a light bulb? He holds while the whole world revolves around him."

And Twitchy's pick for the winner: "What are the best four years of a journalist's life? Third grade."

Another is, "Why are there only 2 pallbearers at a 'journalist's funeral?" "Garbage cans only have two handles."

And, "How do you make a journalist's eyes light up?" "Shine a flashlight in his ear."

The jokes come at a time when the rancor between the White House and the media never has been stronger. Reporters repeatedly have challenged President Trump's intelligence, patriotism, motives, integrity, ethics, finances, family and more. In return, he's repeatedly called out reporters, to their faces, for "fake news."

"What do you call 25 skydiving journalists?" "Skeet."

"How do you get a one-armed journalist out of a tree?" "Wave to them."

"What's the difference between a smart journalist and Bigfoot?" "Bigfoot has been spotted."

"What do you do if a journalist throws a grenade at you?" "Pick it up, pull the pin out, and throw it back."

"What's the different between God and a journalist?" "God doesn't think he's a journalist."