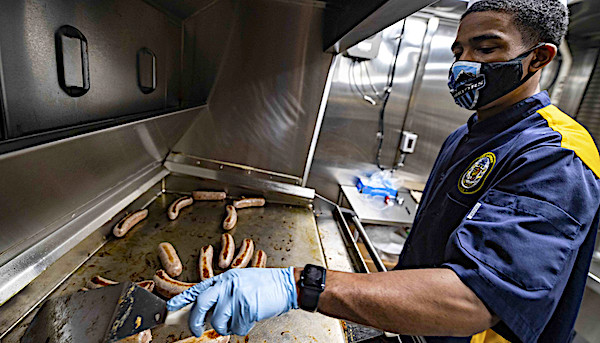 Tyson Foods rolled out a full-page advertisement Sunday in The Washington Post and The New York Times warning that the country’s food supply chain is “breaking” amid continued lockdowns aimed at slowing down the coronavirus pandemic.

The company’s board chairman John Tyson wrote in the ad that farmers will be left in the dust and “millions of animals — chickens, pigs and cattle” will be taken out of the market because of the closure of Tyson processing centers due to virus-related concerns. Tyson Foods closed plants in Logansport, Indiana, and Waterloo, Iowa, where at least 182 cases of the virus originated.

“There will be limited supply of our products available in grocery stores until we are able to reopen our facilities that are currently closed,” Tyson added in the ad, which also appeared in the Arkansas Democrat-Gazette. “Meat will disappear.”

Officials say the coronavirus pandemic originated in Wuhan, China, before landing in the United States, where it has killed more than 55,000 people. Tyson Foods is not the only food processor feeling the heat. Smithfield Foods shut down a plant in South Dakota indefinitely after hundreds of employees were reportedly infected.

“It is impossible to keep our grocery stores stocked if our plants are not running,” Sullivan said in a statement on April 12. “These facility closures will also have severe, perhaps disastrous, repercussions for many in the supply chain, first and foremost our nation’s livestock farmers.”

Roughly 238 Smithfield employees had active cases of the virus, which makes up about 55% of South Dakota’s total, according to South Dakota Gov. Kristi Noem. Noem recommended the company shutter the plant, which has about 3,700 workers, for at least two weeks. Smithfield also closed a JBS facility in Worthington, Minnesota.

The Waterloo, Worthington and Sioux Falls plants make up roughly 15% of the country’s pork production.