Whitmer told MSNBC's Rachel Maddow the protest was "irresponsible" and that "we might have to actually think about extending stay-at-home orders, which is supposedly what they were protesting."

However, only about 150 "Operation Gridlock" protesters gathered on the lawn of the state capitol Wednesday while thousands remained in their cars, creating a miles-long backup.

Whitmer's orders include barring people from traveling from house and house, even to vacation homes; shutting down certain sections of big-box stores; and banning some types of boats but not others.

"People are basically being told what they can and can't buy at stores," Matt Seely of the Michigan Conservative Coalition told Grand Rapids, Michigan's WOOD-TV. "Nothing makes sense. You can buy a bottle of liquor, but you can’t buy a gallon of paint.”

After the protest Wednesday, several Michigan sheriffs announced they will not enforce some of the governor's shelter-in-place orders, arguing they are bound by the Constitution. 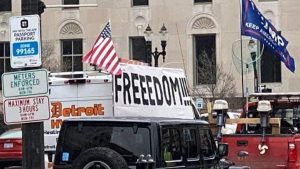 On Wednesday, thousands of protesters showed up in cars while an estimated 100 to 150 people gathered on the lawn of the capitol with signs such as "Liberty once lost is lost forever," "Security without liberty is called prison" and "Recall Whitmer." 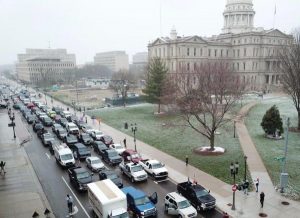 Justin Heyboer of Alto, Michigan, told the East Lansing Journal his fourth-generation family business has been crippled by the lockdown. 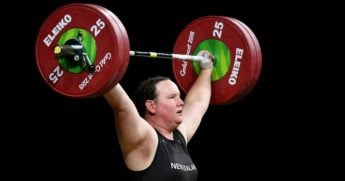