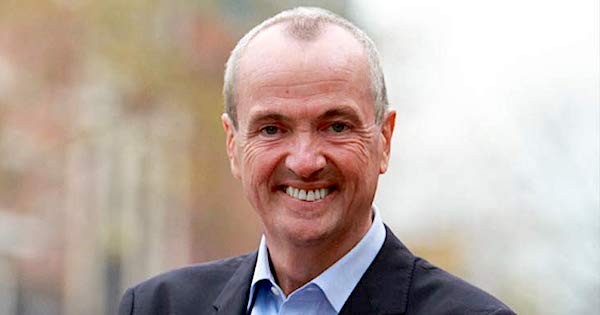 New Jersey Democratic Gov. Phil Murphy admits he never gave a thought to the U.S. Constitution when he shut down churches and synagogues in his state.

He was responding to a question Wednesday night from Fox News host Tucker Carlson.

"The Bill of Rights, as you well know, protects Americans, enshrines their right to their religion as they see fit, to congregate together, to assemble peacefully. By what authority did you nullify the Bill of Rights in issuing this order? How do you have the power, as the governor of New Jersey — of any state — to simply, with a wave of your hand, nullify people’s constitutional rights as enumerate in the Bill of Rights?"

"That’s above my pay grade, Tucker. I wasn’t thinkin’ of the Bill of Rights when we did this."

Talk-radio host Rush Limbaugh pointed out that Murphy's statewide closure order – while allowing liquor stores to remain open – was typical of orders by other governors.

"I want to give this guy the benefit of the doubt, Gov. Murphy, but one thing is clear. He was telling the truth when he said the Bill of Rights was 'above his pay grade.' It ought not be. He’s the governor of one of the largest states by population in the country. 'It’s above my pay grade, Tucker. I wasn’t thinking of the Bill of Rights when we did this,'" Limbaugh said.

"OK. So he’s not alone. The people who are advocating shutting down this economy, advocating/mandating that you stay at home — mandating that you can’t do this, you can’t do that, you can’t go here, you can’t go there — don’t even care about the Constitution. Or, giving him the benefit of the doubt, he didn’t even stop to think about it. He didn’t even stop to think about whether or not people’s constitutional rights were respected," Limbaugh said.

"Is this pandemic, is this virus worth throwing away people’s constitutional liberties? Is it worth that? Is staying away from it worth it? Because if it is, get ready, because there are gonna be a whole lot of things that happen following this virus that are gonna be said to be worth suspending constitutional rights. These governors and mayors are getting off on this newfound power."

"This," he said, "is dangerously shocking. You watch Gov. Murphy, and he looks harmless on TV. He looks like all he’s doing is his best, trying to implement his best practices to save lives. He doesn’t…? He didn’t even think of the Bill of Rights? Wouldn’t you think that somebody that’s a governor would at least try to balance these competing interests? He didn’t even consider them — and he’s not alone."

Murphy's comments about the Bill of Rights begin at about 10:30:

Carlson also pointed out the governor wants a standard of zero new cases, which is far more strict than society accepts for any other affliction.

Carlson pressed Murphy on the constitutionality of his moves.

"Since you are an elected official, a leader in the government, an executive, how do you have the authority to order something that so clearly contravenes the Bill of Rights of the United States – the U.S. Constitution – where do you get the authority to do that?"

Murphy said: "Well, here's the thing, we know we need to stay away from each other, number one. Number two, we do have broad authority within the state. And number three, we would never do that without coordinating, discussing, and hashing it out with the variety of the leaders of the faiths of New Jersey."

In Murphy's state, 15 men were arrested and charged after attending an Orthodox Jewish funeral recently.