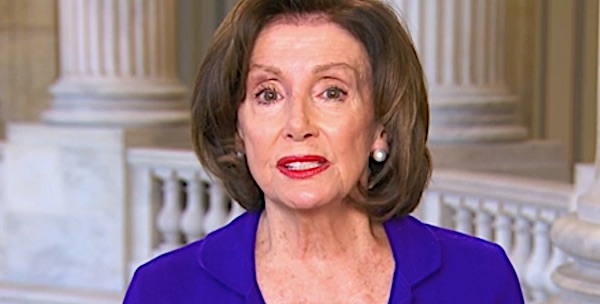 House Speaker Nancy Pelosi, D-Calif., says a "chunk of money" will be set aside in the next coronavirus stimulus bill to help expand vote-by-mail across the nation.

Pelosi, in an interview Wednesday with MSNBC's "Morning Joe," said funds will go to protecting election "integrity" in response to Russian interference and to expanding vote-by-mail in response to the coronavirus pandemic.

The House speaker was asked about new report by the Senate Intelligence Committee that U.S. intelligence agencies concluded Russia interfered in the 2016 presidential election.

"Well, I'm not surprised. As a member of the Gang of Eight, I watched this whole investigation proceed," Pelosi said.

"It leads you to the question about what does Vladimir Putin have on President Trump personally, politically, financially, in every way?"

She said that regardless of "what the president says, it cannot be denied."

"But it takes us to the next step. They have also told us 24/7 the Russians are still at work trying to undermine our election," she said.

"That is why we have to have an important chunk of money in this next bill that will enable us to protect the integrity of our elections, as well as enable the American people to vote by mail, especially at this time of a health danger in going to the polls.”

Pelosi said voting is the "lifeblood of our democracy."

"So here we are trying to protect the lives of American people, the livelihoods of the American people, and also the life of our democracy. That is what we are going to do in the next bill as well," she said.

Contrary to Democratic and media spin, the Senate committee's bipartisan report confirmed there was no evidence of collusion by the Trump campaign, that it was unclear Russia wanted Trump to win and that former FBI Director James Comey acknowledged the bogus Democrat-funded, anti-Trump "dossier" was part of the Intelligence Community Assessment report on Russian interference in 2016.

The Democrats' push for nationwide mail-in voting recently got a boost from former first lady Michelle Obama, who proposes that voters be allowed to request ballots online and print them at home.

Nationwide mail-in voting, he said, "would instantly destroy the public's faith in election outcomes, and hence our democracy itself," he said on his show earlier this month.

As evidence, he pointed to the vote last fall in Orange County, California, where the Democratic-controlled state legislature has established so-called “ballot harvesting." The practice allows political activists to pick up completed ballots and turn them in by the hundreds and thousands.

In Orange County, 62% of ballots were absentee, and a substantial percentage arrived after election day.

A quarter-million of them were cast by "inactive voters," meaning people who hadn't voted in the past four years.

"Under California law, there is virtually no way to distinguish a fraudulent vote from a real one," he said.

"Now, Democrats would like to see this system come to your state — to every state — and they're using the coronavirus pandemic to justify it," he said.

The Hill reported governors from New England to the South are signaling a new willingness to expand voting measures such as early voting and mail-in ballots.

"You're seeing governors, regardless of party, really succumbing to the pressures of the moment, I think, rather than protecting the integrity of the ballot box," Republican strategist Ford O’Connell told The Hill. "I think what a lot of these governors don't recognize is that what looks good today, may not look good tomorrow."

Judicial Watch announced this month a new lawsuit, in North Carolina, where many of the state's 100 counties have a large number of ineligible voters on their rolls.