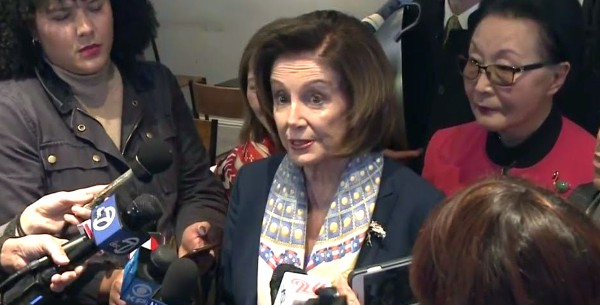 House Speaker Nancy Pelosi finally was asked to explain why – despite repeatedly accusing President Trump of "underplaying" the coronavirus threat – she was in San Francisco's crowded Chinatown in late February encouraging people to come join her.

Her justification, she told Fox News' Chris Wallace on Sunday, was that Trump had made Asians "a target of violence" by using the term "Chinese coronavirus."

Pelosi said Feb. 24: "That's what we’re trying to do today is to say everything is fine here. Come because precautions have been taken. The city is on top of the situation."

Wallace asked Pelosi whether or not she had done the very thing she's accused Trump of doing, "underplaying the threat in the early days."

"No," Pelosi replied. "What we were trying to do is end the discrimination, the stigma that was going out against the Asian-American community and in fact, if you will look, the record will show that our Chinatown has been a model of containing and preventing the virus, and I'm confident in our folks there and thought it was necessary to offset some of the things that the president and others were saying about Asian-Americans and making them a target. A target of violence across the country."

Wallace followed up, asking if she didn't think she was contributing to the "perception that there wasn't such a threat generally" by walking around "without any masks."

The term "Chinese virus" or "Wuhan virus" was regularly used by establishment media outlets such as CNN and the New York Times in the early days of the pandemic, the president's defenders have pointed out.  And popular names of outbreaks historically typically have been tied to their place of origin, such as the Hong Kong flu and the Asian flu.

In fact, Pelosi was asked by a reporter Feb. 24 whether "racism was keeping people out of Chinatown" and she said she didn't know.

"Well, I can’t – I don’t know that. I wasn't in that conversation," she said. "But, I do think that because it started in China, there's a concern that are the – is the Chinese government doing what it needed to do early enough, and now as we go forward. But that should not be carried over to Chinatown and San Francisco. I hope that it’s not that.

"But, all I can say is that I’m here. We feel safe and sound, so many of us, coming here to not only say that it’s safe, but to say thank you for being Chinatown. Thank you."

A couple of weeks prior to Pelosi' Chinatown appearance, New York City Mayor Bill de Blasio declared that his city's Chinatowns "are open for business."

He said the fears about the coronavirus "are not based on facts and science."

"The risk of infection to New Yorkers is low. There is no need to avoid public spaces," he said Feb. 13.

In the interview Sunday, Pelosi also criticized Trump for his leadership on coronavirus testing, saying he "gets an F."

Trump weighed in on the interview via Twitter, calling Pelosi "an inherently 'dumb' person."

And he had words for Fox News and Wallace, saying they are "on a bad path."

Trump said Pelosi "wasted all of her time on the Impeachment Hoax."

"She will be overthrown, either by inside or out, just like her last time as 'Speaker,'" he wrote. "Wallace & @FoxNews are on a bad path, watch!”

Trump insisted in a briefing Saturday that the nation's testing capacity is "fully sufficient" to begin reopening the economy.