Whether it is a shutdown-induced form of spring fever or the defiant opposition to authority that always seeps just under the surface of the American character, protesters are pushing back against government restrictions imposed to address the threat of the coronavirus.

Protests in Raleigh, North Carolina, and Columbus, Ohio, also drove home the message that more and more Americans want the government to focus on reopening the economy, not adding layers of restrictions.

Protesters in Kentucky also marched Wednesday to demand that Democratic Gov. Andy Beshear reopen the state, according to the Louisville Courier Journal.

The Kentucky marchers timed their protest at the state capitol building in Frankfort to the hour when Beshear was holding his media briefing.

Protesters who oppose Gov. Andy Beshear’s decision to close businesses to slow the spread of the coronavirus have gathered en masse outside the room where he is doing his daily #COVID19 press conference, crying out “We want to work!” and now “Facts over fear!” pic.twitter.com/49812u8G4R

Chanting phrases like "facts over fear" and "we want to work," in addition to blowing horns, the roughly 100 people at the protest made such a ruckus that, inside, Beshear mentioned them during his virtual televised briefing, saying, "there's some noise in the background."

"We do have some folks up in here in Kentucky today -- and everybody should be able to express their opinion -- that believes we should reopen Kentucky immediately, right now," Beshear said.

The protesters were of a different mindset:

We want to go back to work Kentucky residents protest 4/15/2020 pic.twitter.com/rHTGLgrcQ3

“Open up the church" and "you are not the king" were among the slogans they yelled at Beshear during their demonstration.

“I think people are just sick and tired of this,” protest organizer Erika Calihan of Lexington told the Courier Journal.

At the top of the list of her demands was that small businesses be allowed to reopen, while implementing social-distancing policies.

She noted that chains such as Walmart are allowed to do so.

Calihan was asked whether it was possible that the protesters, who the media reported were not always six feet apart, might have or spread disease.

“I don’t know, I can’t control what diseases people have and don’t have. All I know is that people are fed up," she replied.

“We just came here to hopefully get a message to Beshear to open up Kentucky,” Nora Falcon, 52, of Leitchfield, said.

“I want to be in my church with our parish.”

One legislator said citizens need to know that a return to normal economic life is in the cards.

“If they don't feel like there's a plan and a potential timeline for a return to normalcy, I'm afraid you will see more and more of that and/or people simply disregarding the restrictions." 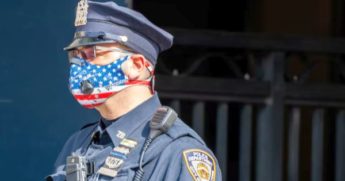