Shutdown orders coming from states like California to fight the "invisible enemy," the coronavirus, are breathtaking in their breadth. And, they have been implemented with reckless disregard for individual liberty and constitutional rights. Consider a few examples:

California Gov. Gavin Newsom's shutdown order mandates all Californians to "stay home or at their place of residence except as needed to maintain continuity of operations of the federal critical infrastructure sectors" as identified by the U.S. Department of Homeland Security. No other exceptions to the stay at home order are provided. Yet the order is contradicted by the state's own covid19.ca.gov website, which states, "Everyone is required to stay home except to get food, care for a relative or friend, get necessary health care, or go to an essential job." One would think that a governor putting such extraordinary measures in place, and expecting all Californians to follow them or be subjected to fines and/or imprisonment, would be more careful in drafting such an executive order.

Constitutional rights may only be curtailed where there is a "compelling governmental interest" and the law or order is narrowly tailored to achieve that interest. It hardly seems that Newsom was mindful of this test in crafting an order denying essential liberties, i.e. freedom of movement, association, assembly, protection of property, etc. 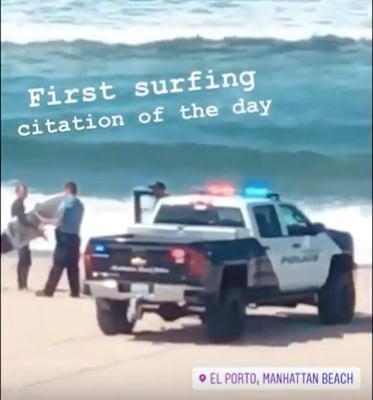 The state's website also says that it is OK to go outside and exercise. Certainly, many medical professionals have expressed the importance of exercise and fresh air to stay healthy and keep immune systems strong. The website notes that, "To help reduce crowds, State Parks is modifying operations at some parks, including closing vehicular access and parking lots to reduce density of visitors." It then points you to a website to check the status of the state park in your area. Sounds reasonable, but when you go to the State Park website, it states, "ALL 280 State Parks Temporarily Closed"!

Oh well, there are always mountain trails, bike paths and the beaches to use for exercise and fresh air, right? Nope, closed by county orders. OK, how about city tennis courts and golf courses? Also closed. The reason: People cannot be trusted to keep six feet of separation from each other. Surfers were given citations by law enforcement over the weekend upon returning to land. Yes, that's correct, California has closed the Pacific Ocean. Rather than trusting people to keep social distancing, and having lifeguards and park rangers monitor it, officials have determined that people cannot be trusted and simply ordered it all closed. So much for "narrowly tailored."

Finally, California has allowed county sheriffs to order gun stores to close because they are not deemed essential. So, the L.A. County sheriff ordered gun stores to close, apparently believing that the risk that the virus could be spread at a gun store trumps the Second Amendment right of people to own a gun. One would think narrowly tailored would mean limiting the gun store to a certain number of customers at a time, requiring appointments, or mandating distance between persons standing in line. But, again, officials determined that people cannot be trusted to adhere to such rules, requiring government to step in and simply close the stores.

With gun store closings, California officials may have finally gone too far. On Friday the Firearms Policy Coalition, among others, sued California and the the L.A. County sheriff for violating citizens' Second Amendment right to bear arms. The director of legal policy for the Coalition said on my Hidden Truth Show podcast this week that the closing down of gun stores most certainly is not "narrowly tailored" to address the concern regarding the spread of coronavirus.

"They have completely taken away the right to anyone who does not have a gun during a time when people are most uncertain and there is actual fear of looting," he told me. "It is uncertain times and this is the time when people need an effective measure of defense."

After the case was filed, Homeland Security added gun stores to the list of essential businesses. Thus, per Newsom's order, the sheriff had no choice but to rescind his order!

We all support our mayors, sheriffs and governors working to fight this virus with all available means. But we must adhere to the state and U.S. constitutions. They stand guard over individual liberties, especially in times of crisis. Our history is littered with examples of government violating liberties in response to a crisis due to panic. The internment of the Japanese during World War II serves as just one instructive example.

Let us assure that we adhere to the Constitution now so that when we look back years from now we can proudly say we did all we could to fight the virus, and we did so with the utmost respect for its protection of individual liberties.