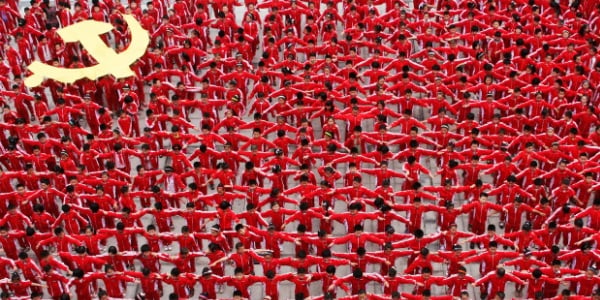 China apparently is turning to slave labor to kickstart its economy, following the catastrophe created by the coronavirus, which originated in Wuhan.

Videos from Xianjiang province distributed by the social media platforms TikTok and DouYin in the past two weeks confirm fears that the communist government is using members of the Muslim Uyghur minority and other Turkic youth as slave laborers, reports Bitter Winter, an online magazine that focuses on religious liberty and human rights in the country.

The report says: "Given that the nation is only just getting back on its feet after months of lockdown, and experts still have yet to give the all clear regarding the virus, the clips showing hundreds of corona-masked Uyghurs being amassed at transport hubs around the region with marching orders to work in factories in inner China, are giving Uyghur activists deep concern."

Videos on the Chinese video-sharing site DouYin Chinese have been collected by Uyghur exile Alip Erking, who posts them on his Twitter feed called Uyghur Bulletin.

They also are appearing on Radio Free Asia, where Alim Seytoff noted the "mass movement of young people out of the province coincided with China's widespread coronavirus lockdown, when other Chinese were forbidden to leave their homes."

He explained, "We only see the mass transfer of Uyghur laborers to other parts of China at this time."

Bitter Winter said Seytoff "pointed out that it was impossible to determine whether these gangs of young people were being forcibly or voluntarily relocated. Dissent in any event would be futile."

"If they refuse, they fear that they will be put into camps," he said.

He was referring, Bitter Winter said, "to the dreaded transformation through education camps and to the past three years of draconian measures to quell Uyghur culture, language and religion which has seen three million Uyghur and other Turkic Muslim[s] incarcerated without trial, ostensibly for 're-education.'"

Bitter Winter quoted Musa Abdulehed, a researcher from Istanbul, who questioned the wisdom of sending new hordes of workers into a region where the coronavirus has been active.

"We have to ask whether money is more important than life to the Chinese government," he said.

He said the world now is finally beginning to wake up to the "evils of the CCP regime."

"We have been warning for years that China will bring disaster upon mankind. And here in the virus we see the results."

Seytoff noted at the RFA site that the transfer of workers was taking place just as many factories were shutting down because of the virus.