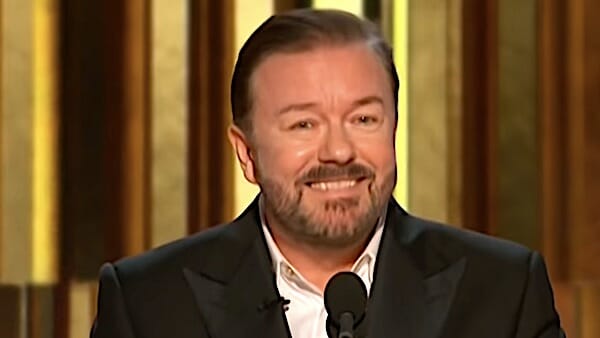 Actor Ricky Gervais, who skewered Hollywood royalty earlier this year with his "You're in no position to lecture the public about anything" speech at the Golden Globe Awards, is at it again.

This time he's scolding the celebrities in their "mansions" who are "moaning" about the inconveniences of the coronavirus pandemic.

The Daily Star of London reported he said the focus needs to be on Britain's National Health Service staff and others who are on the front lines of the battle against the coronavirus.

"These people are doing 14-hour shifts and not complaining. Wearing masks, and being left with sores, after risking their own health and their families' health selflessly," he said in an interview with the Sun newspaper of London.

He made clear he's no fan of those who are "complaining" about being asked to stay at home.

"I see someone complaining about being in a mansion with a swimming pool. And, you know, honestly, I just don’t want to hear it," he said.

He said he rarely leaves his London home, and there is always "too much booze in the house," the report said.

The Daily Star said his comments, described as "savage," came after musician Sam Smith was filmed "in tears as they isolated at their home" worth more than $15 million.

The complaints prompted British commentator Piers Morgan to write on Twitter: "Get a grip, the lot of you. This is a war, not an Instagram story op."

DailyMail.com reported Gervais, 58, said that once the coronavirus crisis is over he doesn't want to hear people "moaning about the welfare state" again.

Other celebrities complainers have included chef Gordon Ramsey, who was mocked for describing lockdown life in his $5 million Cornwall property as "a living nightmare." Talk-show show host Ellen DeGeneres was criticized for comparing it to "being in jail."

In January, Gervais lashed out at Hollywood.

Scott McKay wrote at the American Spectator, "If you're conservative, or even if you're just not a social justice warrior, chances are you'll agree that it was the freshest breath of air that town has felt in decades."

McKay pointed out that Gervais is a liberal but "also a defender of free speech and an equal-opportunity poker of fun."

Gervais said in his Golden Globe speech: "Apple roared into the TV game with The Morning Show, a superb drama about the importance of dignity and doing the right thing, made by a company that runs sweatshops in China. Well, you say you’re woke but the companies you work for in China — unbelievable. Apple, Amazon, Disney. If ISIS started a streaming service, you’d call your agent, wouldn’t you? So if you do win an award tonight, don’t use it as a platform to make a political speech. You’re in no position to lecture the public about anything. You know nothing about the real world. Most of you spent less time in school than Greta Thunberg. So if you win, come up, accept your little award, thank your agent, and your God and f**k off, OK? It’s already three hours long."

McKay said Gervais simply pointed out Hollywood people are "deeply out of touch and intellectually and morally bankrupt."