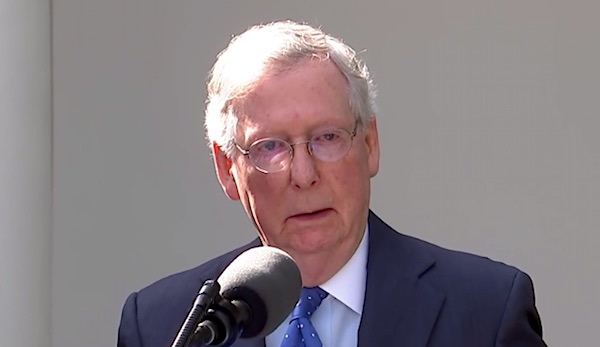 "Let that sink in," he said on his nationally syndicated show.

He was referring to Democrats in Congress blocking a Republican push to unanimously pass a bill to add $250 billion to a loan program for small businesses impacted by the coronavirus pandemic.

CNBC reported that with "only a few senators in the Capitol, Senate Majority Leader Mitch McConnell tried to approve the measure by a unanimous vote. Sen. Ben Cardin, D-Md., objected to the request, stalling the legislation."

The Paycheck Protection Program was launched by the U.S. Treasury Department a week ago but already was running short on funds. It was intended to grant loans to small businesses if they continue to pay their employees.

"So ... when you lose your jobs because your local government killed them in the name of bad data, know that House and Senate Democrats were the ones who decided you should go on welfare instead of having the dignity of a job," Limbaugh said.

McConnell said there was nothing about "changing any policy language" in the additional funding. The funding was established last month in a $2 trillion emergency spending package that Democrats also delayed for days by demanding additional changes – some completely unrelated to the pandemic.

A Democratic spokesman called McConnell's attempt to get more funding for small businesses "a political stunt." However, a Democratic proposal submitted at the same time also was defeated.

CNBC reported: "The Trump administration cited strong demand for the loans this week as it asked Congress for more money for the program, which is designed to help small businesses keep employees on payroll. Lawmakers initially approved $350 billion for loans. They can be forgiven partly or fully if companies use them on expenses such as payroll, rent and utilities."