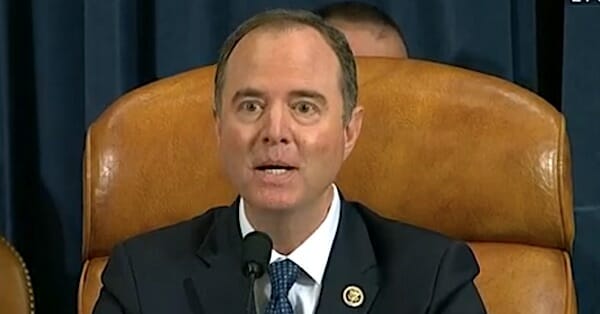 Rep. Adam Schiff, D-Calif., who insisted for years he had secret evidence of the 2016 Trump campaign's collusion with Russia and later led the partisan impeachment of the president, has been reminded that there are three branches of government in the United States.

And he's in the legislative, not the executive.

The reprimand came Monday from Director of National Intelligence Richard Grenell in response to the Democrat's letter objecting to the Trump administration's shakeup of the spy community.

.@RichardGrenell starts letter by dressing Schiff down over not noting the "historic appointment" of a woman, Lora Shiao, to lead NCTC. Grenell is proud of this, but she's been named Acting Director, Chris Miller from DoD was nominated last month. pic.twitter.com/xO0jqluFcd

Schiff wrote to Grenell expressing "concern" that the acting DNI was making changes in the office "without consulting and seeking authorization from Congress."

"President Trump did not nominate you for confirmation as permanent DNI, and it would be inappropriate for you to pursue any additional leadership, organizational, or staffing changes to ODNI during your temporary tenure," the House Intelligence Committee chairman wrote.

Grenell shot back in a letter: "I encourage you to think of the relationship between your committee and the IC as that between the legislative and executive branches of government, rather than that between a hedge fund and a distressed asset, as your letter suggests."

Grenell said he disagreed with Schiff's "proposals to divest the DNI of managerial competence and personnel decision-making authority and to replace your committee's mandate for Intelligence Community (IC) oversight with a mandate for IC administration."

He noted that career intelligence community officials have conducted four studies in the last two years calling for reforms at the ODNI and "are eager to implement the recommendations."

"It is my duty to listen to these ODNI career employees who have ideas on how to improve the work we do for the American people," he said.

Grenell also voiced surprise that Schiff had ignored the "historic appointment" of the first female director of the National Counterterrorism Center.

Grenell already has declassified the footnotes from the DOJ inspector general's report showing the Obama FBI knew it was using Russian disinformation to obtain warrants to spy on the Trump campaign.

He demanded a report on the firing by President Trump of Intelligence Community Inspector General Michael Atkinson.

Atkinson processed the complaint the Democrats used to impeach Trump, granting whistleblower status even though the complaint was based on second-hand information, contrary to the law.

Margot Cleveland wrote in a column for The Federalist that "a full vetting of Atkinson's handling of the so-called whistleblower’s complaint confirms Trump's take that Atkinson 'did an absolutely terrible job.'"

"Atkinson ignored the Legal Counsel's opinion that 'the appropriate action is to refer the matter to the Department of Justice, rather than to report to the intelligence committees,'" and Atkinson then made the issue political by contacting Schiff.

"Had Atkinson reviewed the read-out of Trump’s July 25 call, he would have discovered numerous allegations contained in the complaint were false," Cleveland wrote.