Christopher Steele told a British court last month that he no longer has documents and other information from his meetings with the main source for his Trump dossier, suggesting that the former British spy has no way of backing up his side in a dispute with the Justice Department’s inspector general (IG), according to a deposition transcript obtained by the Daily Caller News Foundation.

Steele also told the court that his communications regarding the dossier, including with Fusion GPS, were “wiped” in December 2016 and January 2017, the transcript shows.

The former MI6 officer made the disclosures during a March 17-18 deposition in a defamation case related to the dossier. The DCNF obtained a transcript of the deposition.

Steele suggested in a Dec. 10 statement that he had evidence that would shed light on what his main dossier source told him back in 2016, when Steele was working for the firm Fusion GPS to investigate the Trump campaign.

Steele’s statement was a response to an IG report released the day before that said that Steele’s source — dubbed the “Primary Sub-Source” — told the FBI in January 2017 that Steele misrepresented or embellished information in the dossier.

That bombshell severely undermined Steele’s report, which the FBI used as part of its investigation into the Trump campaign.

In a rebuttal to the IG, Steele’s lawyers disputed what the dossier source purportedly told the FBI, and said that the source’s debriefings to Steele “were meticulously documented and recorded.”

They also asserted that if Steele had been given a chance to respond to the IG report, “the statements by the ‘Primary Sub-Source’ would be put in a different light.”

It is unclear if Steele made audio or video recordings of the debriefings with the source, or if the retired spy was referring to written or electronic documents. It is also unclear whether Steele got rid of the information himself, or if it was lost through other means. Steele’s lawyer did not respond to a request for comment.

The status of the information was revealed during an exchange Steele had on March 18 with Hugh Tomlinson, a lawyer for Petr Aven, German Khan, and Mikhail Fridman, the owners of Alfa Bank.

The three Russian bankers are suing Steele for defamation over a memo in the dossier that accused them of making illicit payments to Vladimir Putin.

Tomlinson pressed Steele over the accuracy of his memo, as well as his relationship with “Primary Sub-Source,” the transcript shows.

The lawyer asked Steele about the existence of the documents and recordings that his attorneys mentioned in their rebuttal to the IG report.

“But none of these documents exist, so they have all been destroyed?” a lawyer asked Steele.

“They no longer exist,” Steele said. 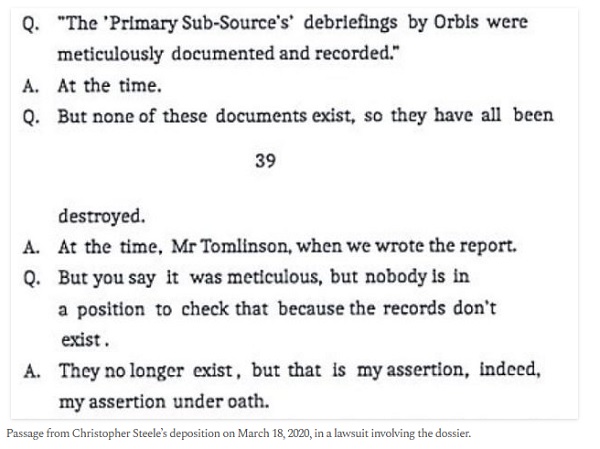 Steele indicated that many other records related to the dossier were deleted, including from a personal email account he used for the Fusion GPS project.

“As I understand your position, you have no contemporaneous notes or emails, save for your notes of interactions with the FBI; is that right?” Tomlinson asked.

“I believe that is true, yes,” Steele replied.

Steele said he had no records related to the creation of his dossier memos, including “Report 112” from the dossier, which dealt with the Alfa Bank owners.

“You have no record of anything, have you?” Tomlinson asked.

“I haven’t got any records relating to the creation of 112,” said Steele.

“Or indeed any of the other memoranda?”

Steele said that a Hushmail account he used in late December 2016 was “wiped” clean. He also said that communications with Fusion GPS on his company’s computer network were scrubbed on Jan. 5, 2017. 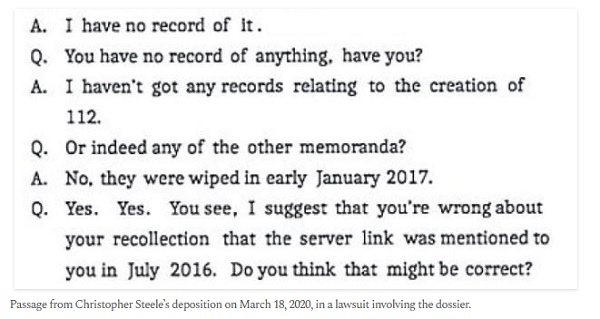 Steele has closely guarded the identity of his dossier source, including during the Alfa Bank deposition. But he said the source had done work for his firm for “several years,” and that his firm Orbis paid retainers to sources of between $3,000 and $5,000 a month.

The source allegedly used a network of contacts inside and outside of Russia to gather tips about Donald Trump, his associates, and Kremlin officials. Steele alleged that the Trump campaign took part in a “well-coordinated conspiracy of cooperation” with the Kremlin to influence the 2016 election. The special counsel’s report found no evidence of a conspiracy, and the IG report cast significant doubt on Steele’s allegations.

Footnotes from the IG report declassified this month showed that the FBI received evidence that Russian operatives may have fed disinformation to Steele.

One footnote said that the U.S. intelligence community gave the FBI a report in June 2017 that said two Russian intelligence officers knew as of July 2016 that Steele was investigating Trump.

Steele also appears to have made an inaccurate claim about the IG report in his haste to defend the dossier during his court deposition. He told Tomlinson, the lawyer for the Alfa Bank owners, that the IG has had to “significantly” amend sections of the IG report dealing with what the dossier source told the FBI.

Steele claimed in the deposition that the IG had retracted claims in the report about the primary dossier source.

“So you think that the U.S. Inspector General’s office has got it wrong and you are right; is that your position?” Tomlinson asked Steele.

He said that the IG report “has already been revised by the Department of Justice in terms of its interviewing of this primary sub-source.” He asserted that the revision “completely changed the nature of the interview that he gave to them in January 2017.”

It is not clear what Steele was referring to since the IG report has not had any significant revisions.

A spokesperson for the IG declined comment but pointed out a section of the report that discusses slight edits to sections regarding the dossier source’s comments to the FBI.

Steele’s attorney did not respond to a request for comment.