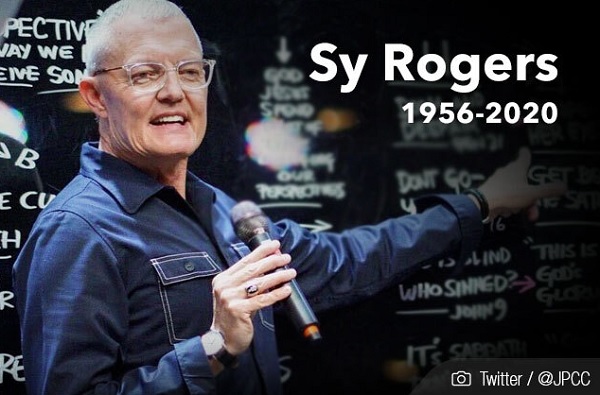 Sy Rogers, known for leaving a homsexual and transexual lifestyle and becoming a gifted Christian teacher and leader, died Sunday, April 19, at age 63 in Orlando, Florida, after battling kidney cancer for eight months.

It was his second bout with cancer. He had been in remission for five years.

He also was an award-winning talk show host. In 1996, Rogers was selected by Christianity Today as one of "50 Up and Coming Evangelical Leaders Under 40."

He promoted sexual integrity and healthy relationships at events such as Hillsong's Colour Conference, which drew more than 15,000, and Promise Keepers.

He preached in a wide variety of influential pulpits, from Southern Baptist to Presbyterian to Pentecostal, ranging from the Free Chapel in Georgia to London’s Kensington Temple to Australia’s Riverview Church.

For six years, beginning in 2012, he was a teaching pastor at Life Church, the largest church in New Zealand, while maintaining his international speaking ministry.

He had been married to Karen since 1982.

Rogers and his family lived on three continents. During the 1980s, he was a pioneer in the fledgling ex-gay movement and directed the now defunct parachurch ministry in Orlando called Eleutheros, a Greek word for freedom from bondage. Rogers' ministry offered pastoral care and support groups for clients who struggled with sexual confusion, abuse and gender identity issues. For two years he served as president of Exodus International, a coalition of support groups for people with unwanted same-sex attractions.

In 1991, he and his family moved to Singapore, where he was one of 25 pastors on staff with an Anglican church, Church of our Savior. While there he founded a recovery ministry that is still in operation, called Choices.

In 1998, he moved his family to New Zealand where his itinerant preaching and teaching ministry was launched.

He also was part of No Longer Music, performing as the lead vocalist in a four-continent world tour called Primordial. The Christian rock operetta played in major secular night clubs, portraying the character of God on trial in a world of suffering.

In 2001, he and his family moved back to Orlando. A decade later, they returned to New Zealand.

His own story, from which he drew insights, included childhood sexual abuse and homosexuality. He presented his testimony in a video, "One of the Boys," as well as many media interviews and articles.

Upon hearing of his death, Jentezen Franklin, the senior pastor of Free Chapel in Gainesville, Georgia, said, "Sy's contribution made us a more compassionate ministry and he had an enormous impact on our church."

Hillsong founders Brian and Bobbie Houston wrote: "Sy was truly one of the kindest people you could ever meet. He exemplified grace and freedom and a passion to always bless others."

Rogers is survived by his wife, Karen, daughter Grace, son-in-law Steve, and his grandchildren, ages 8 and 4.