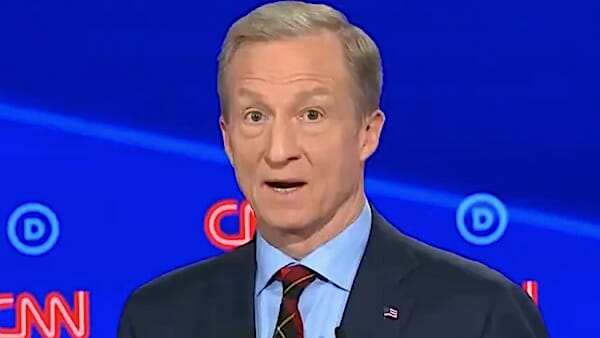 Like the rest of the country, although far less than New York, California is suffering through the Covid-19 crisis. But in California, the pandemic seems likely to give the state’s political and corporate elites a new license to increase their dominion while continuing to keep the middle and working classes down.

Perhaps nothing spells the triumph of California’s progressive oligarchy more than Governor Gavin Newsom’s decision to off-load the state’s recovery strategy to a task force co-chaired by hedge-fund billionaire Tom Steyer. A recently failed presidential candidate, Steyer stands as a progressive funder. He is as zealous as he is rich. Steyer sometimes even found the policies adopted by climate-obsessed former governor Jerry Brown not extreme enough for his tastes.

Some conservatives wistfully hope that the pandemic will push the climate crusaders to the side. In California, at least, the corporate aristocrats, the governmental apparat, and the progressive nonprofits have the momentum to impose their ultra-green vision on the state’s residents. Steyer may have made much of his fortune on fossil fuels, including coal, but now, approvingly described as “a reverent Christian,” the Bay Area mogul seems to be eager to repent, both through his political largesse and as operator of a fulsomely organic ranch down the coast from his San Francisco manse.

What Kind of Recovery Will the Oligarchy Allow?

Steyer’s failed, self-funded presidential run was full of extreme notions, such as imposing a “state of emergency” to address climate issues, essentially shutting down fossil fuels; and, as a kind of bonus for those who still can find work, promoting a $22 an hour minimum wage while offering alms for the soon-to-be-eliminated legions of miners and energy workers.

If this is what he wants for the recovery, Steyer will simply accelerate the state’s already poor performance in creating higher-wage middle- and working-class jobs outside those created or subsidized by government. Over the past decade, according to Chapman University’s Marshall Toplansky, the vast majority of jobs being produced in California pay under the median wage, and 40% pay under $40,000 a year. Since 2008, the state has created five times as many low-wage jobs as high-wage jobs.

California’s climate regulatory regime, notes relocation expert Joe Vranich, has been particularly hard on manufacturing. Over the past decade, according to BLS data, California has fallen into the bottom half of states in manufacturing-sector employment growth, ranking 44th last year; its industrial new job creation has been negative, compared with gains from competitors such as Nevada, Kentucky, Michigan, and Florida. Even without adjusting for costs, no California metro ranks in the US top ten in terms of well-paying blue-collar jobs; but four metro areas—Ventura, Los Angeles, San Jose, and San Diego—sit among the bottom ten.

Perhaps nowhere will the pain be worse than in Bakersfield, capital of California’s once-vibrant oil industry. That industry is now slated for extinction by policymakers, even as the state has emerged as the largest US importer of energy and oil, much of it from Saudi Arabia. This ultimate effort at “virtue signaling” will cost California as many as 300,000 generally high-paying jobs, roughly half held by minorities, and will particularly devastate the San Joaquin Valley, where 40,000 jobs depend on the industry. “Imagine that the state dictated that the entertainment industry be eliminated from Los Angeles, or the tech industry be eliminated from Silicon Valley. That is what removing the oil and agriculture industries from Bakersfield is like. “It is an existential threat to the entire area,” says Rob Ball of the Kern County Council of Governments.

In California today, anyone who dissents—even a scientist or respected economist—with the green party line is dismissed as a heretic who is not worth listening to. This treatment is facilitated by a media that tends to embrace the most apocalyptic projections of, for example, coastal erosion, with little attempt to ascertain the facts or look at alternative analyses.

The predictably pious Steyer and his fellow commissioners will no doubt claim devotion to the interests of average citizen. But, as a new lawsuit filed by some 300 civil rights leaders asserts, the policies being backed by Steyer and his fellow commissioners have already had produced disastrous results for millions of Californians. The real collective badge of shame is not California’s GHG emissions but the prevalence of poverty amid enormous affluence.

Critically, economic growth, at least outside asset- and iPhone-price inflation, is itself considered a threat to the planet within the environmental community, which largely hails the Covid lockdowns as a “fire drill” for future actions to promote “de-growth.” The open hope, as a Psychology Today writer puts it, would be to tame “the human beast” by imposing low-consumption lifestyles on hoi polloi, including in developing countries. Such policies might not affect the prospects for social media, search, or import-dependent firms like Apple, but they have already been beastly for millions of Californians.

Even before the lockdowns, which could last until summer, California’s cost-adjusted poverty level was among the highest of any state and remained higher in 2019 than in 2007. Nearly one in five Californians—many who are working—lives in poverty (using a cost-of-living adjusted poverty rate), the highest rate of any state; the Public Policy Institute of California estimates that another 20% live in near-poverty—roughly 15 million people in total.

The lack of upwardly mobile jobs has created poverty rates for California’s Latinos and African Americans, most of them working, and has made them poorer than their counterparts elsewhere, including in Texas, California’s primary competitor for talent, jobs and company locations and a state with a similarly diverse population. More than half of all California Latino households, now a plurality in the state, can barely pay their bills, according to a United Way study. “For Latinos,” notes longtime political consultant Mike Madrid, “the California Dream is becoming an unattainable fantasy.”

The loss of jobs, particularly in hospitality and retail, from the coronavirus crisis could further exacerbate this situation further. The most extreme and, most obvious expression of pervasive inequality and economic dysfunction lies is evident on our streets. Indeed, even as homelessness has been reduced in much of the country, it has continued to swell in California. Roughly half the nation’s homeless population lives in the Golden State, many concentrated in disease- and crime-ridden tent cities in either its largest urban region, greater Los Angeles, (its largest urban region) or in iconic San Francisco.

And for Our Next Act: Making the State More Vulnerable to the Next Pandemic

When Steyer and other members of the task force—one can’t help but compare them to the crime commission run in New York City by Charles “Lucky” Luciano—decide to open the economy, they will no doubt claim, as with their climate pieties, that they are acting purely on the basis of “science”—as long as it agrees with their conclusions.

Logic is not a strong point here, since the green lobbies and their developer allies keep pushing density and getting people out of the relative safety of their cars and into mass transit, which, along with entrenched poverty, has done much to deepen the crisis in New York, as the Manhattan Institute’s Howard Husock observes.

As of April 26, Los Angeles County, with almost 2 million more residents than New York’s five boroughs, had suffered 913 Covid deaths, compared to 12,067 in New York City. The Big Apple accounts for over two-fifths of all US transit ridership, and its subways have repeatedly been singled out, including in a recent MIT report, as incubators of the pandemic.

The key here may be what demographer Wendell Cox has described as “exposure density.” Compared with Angelenos, Cox suggests, New Yorkers tend to work in large, crowded workplaces and are far more mass-transit-dependent. On an average workday, more than 5 million people jostle onto the city’s subway trains—nearly 40 times as many as ride LA’s subway lines and 15 times as many when the lower-capacity light rail lines are added in. The rates of infection and death are far lower in the surrounding areas—even in more dispersed, car-dependent Orange, Riverside, and San Bernardino Counties.

Even San Francisco, the nation’s second-densest municipality, with more than 500,000 residents, has been far more successful in controlling the virus’s spread. The city is somewhat less car-centric than greater Los Angeles; and the Bay Area transit commuting rate is about 60 percent lower than that of New York (combined statistical areas, or CSA). San Francisco has a vehicle ownership rate at least 85% higher than in the four most dense New York boroughs (Manhattan, Brooklyn, the Bronx, and Queens) and is a much smaller city; San Franciscans are far more able to cab, Uber, or drive their own vehicles, avoiding crowded public transit.

Clearly, some ways to reduce exposure, as well as GHG emissions, would embrace telecommuting, which had been expanding and seems certain to grow in the future. But California, unlike other states, has no interest in adopting telecommuting as a key strategy; instead, it seems eager to embrace the viral formula of New York, which is driving a new exodus from the country’s premier urban center.

They continue to push their transit and density strategy despite concerns about social distancing and a profound resistance from hoi polloi. As in many areas, the greens have no real interest in actual data: despite state climate policies designed to push people onto buses and trains, transit ridership has lagged—in Los Angeles, it is lower than in 1985—and virtually all population growth has taken place on the periphery of large metropolitan agglomerations.

California’s problems won’t end with this pandemic. Under the leadership of politicians like Newsom and Steyer, however promising the future is for the tech oligarchs and green energy speculators, the Golden State seems determined to offer ever less opportunity for the state’s already struggling middle- and working-class families—except, perhaps, to get sicker when the next pandemic comes along.

Joel Kotkin is a Presidential Fellow in Urban Futures at Chapman University in Orange, CA and executive director of the Urban Reform Institute in Houston, TX. His next book, The Coming of Neo-Feudalism, will be published by Encounter in May.

Duh! Experts say prices for Hunter Biden paintings not based on value