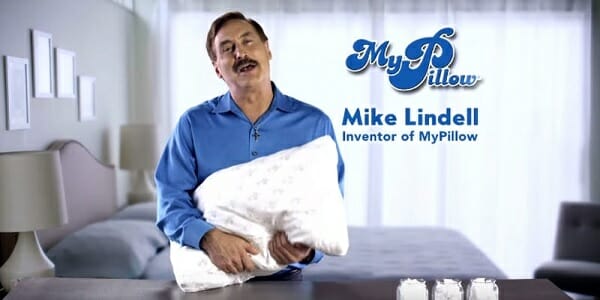 One of President Trump's biggest supporters in American industry, MyPillow founder Mike Lindell, delivered a harsh verdict on Washington journalists after he appeared at a White House news conference to talk about his company's decision to join in the battle against the coronavirus pandemic by producing cotton face masks for hospital workers.

Establisment media figures criticized him for urging people to pray and read their Bibles, and for saying America was blessed to have Trump as president "for such a time as this."

"I'm appalled by the journalists I see there," he said. "I used to think, 'Are they really that evil?' Well, yes they are."

At the daily briefing of the White House Coronavirus Task Force on Monday, Lindell said, "God gave us grace on November 8, 2016, to change the course we were on. Taken out of our schools and lives, a nation had turned its back on God."

He said people fearing the coronavirus should return to the Bible and "spend time with our families."

"Our president gave us so much hope," he said. "Where just a few short months ago, we had the best economy, the lowest unemployment, and wages going up, it was amazing. With our great president, vice president and this administration and all the great people in this country praying daily, we will get through this and get back to a place that’s stronger and safer than ever."

Some journalists suggested it was unconstitutional for Lindell to be talking like that behind a podium at a White House news conference.

Ali Velshi of MSNBC wrote, "Trump must called the 'My Pillow' guy up to the podium in the Rose Garden. You cannot make this stuff up."

Lindell then went on the Lou Dobbs show to comment:

"I heard Jim Acosta attacked me, too, and he was 10 feet from me in the Rose Garden," Lindell said.

"This is just evil, Lou, this is evil. I was talking to the president, I said, you know, Mr. President, you doing these press conferences … I've had friends of mine who are on the left, I showed him one of my texts that says, 'Mike you know what, I'm not a big fan of President Trump but, God bless him, he is doing an amazing job. I think he's turning me.' These are the real people that are seeing now that this president is the best man in charge for such a time as this," Lindell said.

"It's just those newscasters, those journalists, we know who they are. … I put out a message of hope to the country that God had given us grace on Nov. 8, 2016, for such a time of this. A nation had turned its back on God. … [but] we can get back in the word with our Bibles."

He said Americans can be grateful for an administration "that can make some decisions to get us through this."

"I'm appalled by the journalists I see there. I used to think, 'Are they really that evil?' Well, yes they are."

MyPillow already is producing 10,000 masks a day and plans to increase the production to 50,000 daily.