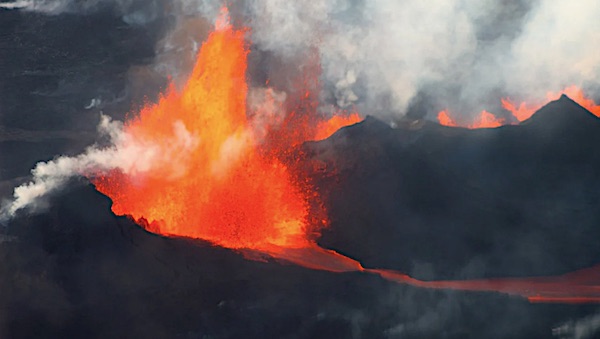 A region of Iceland is erupting for the first time in 800 years, raising concern of disruptions in air travel for centuries to come.

The Guardian of London reported that since Jan. 21, the Reykjanes peninsula southwest of Iceland's capital, Reykjavik, has experienced more than 8,000 earthquakes. About 10 centimeters of land has risen due to magma intrusions underground, the paper said.

"It seems that after being relatively inactive for many centuries, this region is waking up," Lancaster University volcanologist Dave McGarvie told the Guardian.

The area is fed by five volcanic systems, the Guardian said, "which seem to come to life in a coordinated way roughly every 1,000 years."

Satellites picked up images of two eruptions recorded by the Center for Volcanology and Geological Disaster Mitigation, reported the Express news paper of London.

The Volcano Discovery website counts more than two dozen places around the world that have reported significant volcanic activity.

Klyuchevskaya Sopka, the highest peak on the Kamchatka peninsula in Russia, erupted with a volcanic ash plume four miles high, according to the Volcanic Ash Advisory Center in Tokyo.

At Shiveluch on the Kamchatka peninsula, a smoke plume reached seven miles.

There also was activity nearby, at Aso and Sakarajima in Japan's Kyushu region.

In Indonesia, along with Krakatoa, volcanic acvitity was reported at Ibu, Merapi and Semeru. On the island of Sumatra, Kericini erupted.

In Mexico, a volcanic ash plume rose an estimated 19,000 feet at Popocatepetl.

Across South America, Sangay and Reventador in Ecuador, Sabancaya in Peru, Nevados de Chillan in Chile and Santiaguito in Guatemala have been active.

Stromboli in Italy was churning out "mild to sometimes strong" explosions at a rate of about 15 an hour, accompanied by a lava flow.

Erebus in Antarctica had an active lava lake in its summit crater, and Erta Ale in Ethiopia recently created a new fissure vent with new lava flows.

The Yellowstone caldera volcano, which is underneath the huge national park, has been reporting elevated seismic activity in recent days, the report said.

In Sumatra, the Kerinci volcano released ash into the skies, triggering several advisories over the last few weeks.

Watch the Krakatoa explosion for 2018: