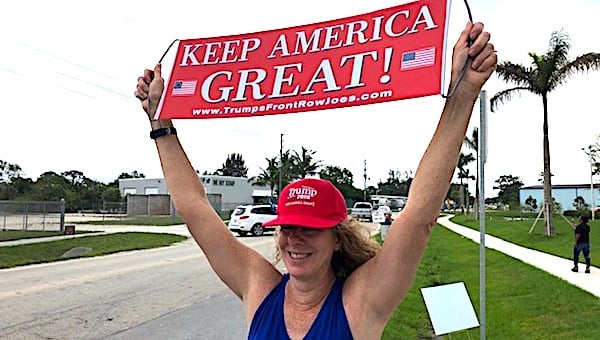 A supporter of President Donald Trump holds a "Keep America Great" sign during a Reopen America for Business rally on Friday, April 24, 2020 in Stuart, Florida. (Photo by Joe Kovacs)

There will be "chaos" in the 2020 presidential election if the Supreme Court decides that states cannot require Electoral College electors to vote for the candidate their voters select, warns an analysis by two legal scholars.

In the two cases – Chiafalo v. Washington and Colorado Department of State v. Baca – a designated Electoral College elector chose not to vote for the candidate that earned the most popular votes in the state. The electors were replaced and were sued.

According to the Constitution, voters in presidential elections actually choose a preferred slate of electors rather than a candidate.

But if the Supreme Court rule they are free to support the candidate of their choice, the 538 members of the Electoral would become "the most important elected officials in the nation."

Oral arguments are scheduled soon before the Supreme Court, and a decision is expected in months.