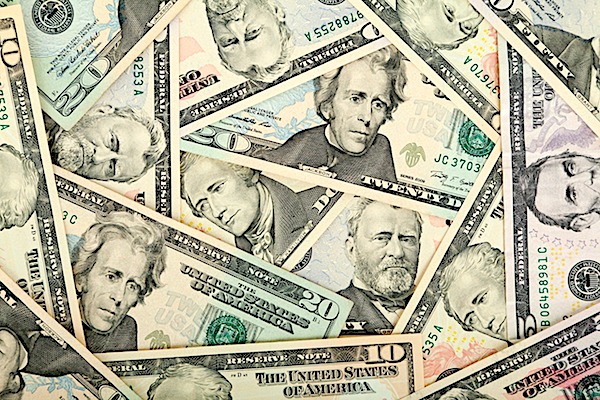 Congress and President Trump approved the CARES Act at the end of March. Now, in the first week of May, the Department of Justice has filed its first case alleging conspiracy and fraud under the law.

The case is the first to be brought against defendants seeking federal bailout money under the SBA's Paycheck Protection loans. The emergency loans are to help small businesses keep employees on the payroll. The loans will be forgiven and turned into grants if certain conditions are met.

The defendants are David A. Staveley, aka Kurt D. Sanborn, 52, of Andover, Massachusetts, and David Butziger, 51, of Warwick, Rhode Island.

They claimed "to have dozens of employees earning wages at four different business entities when, in fact, there were no employees working for any of the businesses," the DOJ said.

"Every dollar stolen from the Paycheck Protection Program comes at the expense of employees and small business owners who are working hard to make it through these difficult times," said Assistant Attorney General Brian A. Benczkowski of the Justice Department’s Criminal Division. "The Criminal Division is committed to working with our law enforcement partners to root out abuse of the important relief programs established under the CARES Act."

U.S. Attorney Aaron L. Weisman for the District of Rhode Island added: "Tens of millions of Americans have lost their jobs and have had their lives thrown into chaos because of the coronavirus pandemic. It is unconscionable that anyone would attempt to steal from a program intended to help hard working Americans continue to be paid so they can feed their families and pay some of their bills. Attorney General Barr has directed all U.S. Attorneys to prioritize the investigation and prosecution of crimes related to coronavirus and COVID-19, and we are doing just that."

Court documents accused the two of discussing "via email the creation of fraudulent loan applications and supporting documentations to seek loans guaranteed by the SBA for COVID-19 relief through the Paycheck Protection Program (PPP). It is alleged that Staveley posed as his brother in real estate transactions."

One application sought $438,500 for Staveley to pay dozens of employees at three restaurants he owned in Warwick, Rhode Island, and Berlin, Massachusetts. But the DOJ said two of the restaurants had been closed long before the COVID-19 pandemic, and Staveley didn't own the third restaurant he listed.

Butziger sought $105,381 to pay employees of a company called Dock Wireless, but federal investigators spoke with the listed "employees" and found they had never worked for Butziger, the DOJ said.

"This is a critical time for our nation’s small businesses. It is well known that fraudsters prey upon those in vulnerable positions," said SBA Inspector General Hannibal “Mike” Ware. “As this result shows, SBA-OIG and its law enforcement partners are actively working together to root out fraud in SBA’s programs and bring those responsible to justice. I want to thank the U.S. Attorney’s Office and our law enforcement partners for their leadership and dedication throughout this investigation.”

The CARES Act, passed March 29, is to provide emergency financial assistance to the millions of Americans suffering the economic effects of the COVID-19 pandemic. One source of relief provided by the CARES Act was the authorization of up to $349 billion in forgivable loans to small businesses for job retention and certain other expenses, through the PPP. In April 2020, Congress authorized more than $300 billion in additional PPP funding.

The DOJ explained: "The PPP allows qualifying small-businesses and other organizations to receive loans with a maturity of two years and an interest rate of 1 percent. PPP loan proceeds must be used by businesses on payroll costs, interest on mortgages, rent, and utilities. The PPP allows the interest and principal to be forgiven if businesses spend the proceeds on these expenses within eight weeks of receipt and use at least 75 percent of the forgiven amount for payroll."