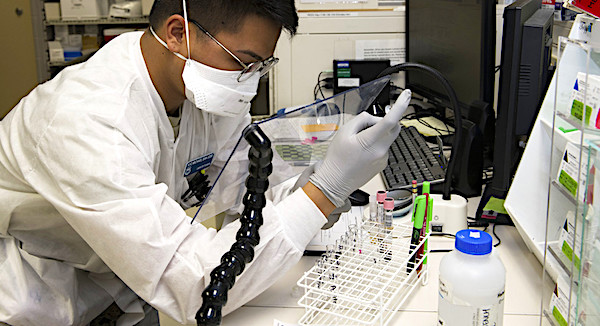 The race is underway worldwide for a vaccine for the novel coronavirus, but one might never be developed, according to a World Health Organization envoy.

"There are some viruses that we still do not have vaccines against," Dr. David Nabarro told CNN. "We can't make an absolute assumption that a vaccine will appear at all, or if it does appear, whether it will pass all the tests of efficacy and safety."

Nabarro, a professor of global health at Imperial College London, said that if no vaccine is developed, the coronavirus would become a "constant threat."

Outbreaks could return seasonally and lockdowns would need to be tightened and loosened, he said.

"It's absolutely essential that all societies everywhere get themselves into a position where they are able to defend against the coronavirus as a constant threat, and to be able to go about social life and economic activity with the virus in our midst," Nabarro said.

Experts are hopeful a vaccine will be developed for COVID-19 because it does not mutate rapidly.

However, no vaccine was ever developed for the SARS or MERS outbreaks, which were caused by a type of coronavirus. By the time the first human trial of a possible SARS vaccine was conducted in Beijing in December 2004, the epidemic was over.

Vaccines, epidemiologists explain, are a means to boost "herd immunity," the resistance to the spread of a contagious disease that occurs when a sufficiently high proportion of the population becomes immune, mostly through being infected and building antibodies.

The Association of American Physicians and Surgeons contends another way to slow the spread is through the proven antimalaria drug hydroxychloroquine, which, in combination with the antibiotic azithromycin, is being used as a prophylactic in some countries.

A total of 2,333 patients have been administered the drugs in studies in China, France, South Korea, Algeria and the U.S. Of these, 2,137 or 91.6%, improved clinically.

There were 63 deaths. However, all but 11 were in a single, non-peer reviewed, retrospective report from the Veterans Administration in which the patients were severely ill.

Peer-reviewed studies published from January through April 20, 2020, show hydroxychloroquine may be beneficial in COVID-19, especially when used early.

The Arizona-based AAPS said in a letter to Arizone Gov. Ducey that many nations, including Turkey and India, are protecting medical workers and contacts of infected persons prophylactically.

We need a plan B

President Trump predicted during a Fox News televised town hall Sunday that a vaccine would be ready by the end of 2020.

The New York Post noted Dr. Anthony Fauci, the lead health expert on the White House coronavirus task force, said last month it was within the "realm of possibility" that millions of vaccines could be ready by January.

Dr. Peter Hotez, dean of the National School of Tropical Medicine at Baylor College of Medicine in Houston, sounded a note of caution in an interview with CNN.

"We’ve never accelerated a vaccine in a year to 18 months," he said. "It doesn’t mean it’s impossible, but it will be quite a heroic achievement."

Nature.com reported researchers around the world are working on more than 90 COVID-19 vaccines.

The London-based New Scientist magazine cited a 2013 study finding that between 1998 and 2009, the average time taken to develop a vaccine was 10.7 years.

Since then, the Ebola vaccine became the fastest-developed vaccine ever, produced in just five years.

The 2013 study calculated that any experimental vaccine tested has a 6% chance of reaching the market. Of those that make it into trials, according to a 2019 analysis, the probability of success is 33.4%.

New Scientist noted that after a vaccine is approved, there's the issue of scaling up manufacturing to make hundreds of millions of doses.