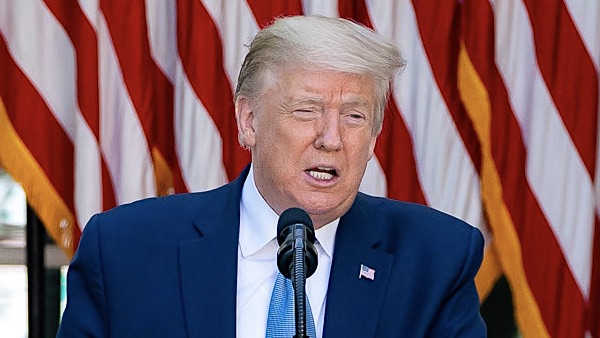 Responding to what he called inaccurate media reporting, Secretary of Veterans Affairs Robert Wilkie criticized a widely cited study of veterans that concluded treating COVID-19 patients with hydroxychloroquine was unsafe.

The Department of Defense and the Veterans Administration have been using hydroxychloroquine for 65 years for diseases such as malaria, lupus and rheumatoid arthritis, Wilkie told reporters Tuesday afternoon during a Cabinet meeting at the White House.

Trump caused an uproar Monday afternoon when he revealed to reporters he's been taking hydroxychloroquine every day for the past couple of weeks as a preventative measure against the coronavirus.

Wilkie emphasized that the study in question was not conducted by the VA as has been widely reported. As WND has reported, it was a "UVA" study, short for the University of Virginia. 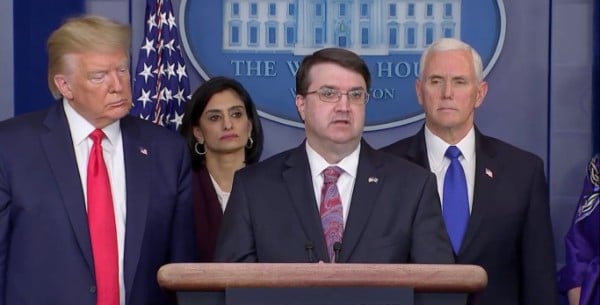 "Researchers took VA numbers and they did not clinically review them," Wilkie said. "They were not peer reviewed. They did not even look at ... the various comorbidities that the patients who were referenced in that study had."

The researchers at the University of Virginia School of Medicine said they found that more patients who took hydroxychlorquine died than those who didn't. Renowned infectious disease specialist Dr. Stephen Smith – who has promoted hydroxychloroquine as a "game changer," reporting success among his patients – has called the Virginia study a "sham."

Should hydroxychloroquine be used to help battle coronavirus?
98% (323 Votes)
2% (8 Votes)

But after Trump's news conference Monday, Fox News anchor Neil Cavuto pointed to the results of the UVA study as cause for alarm, telling viewers people in the "risky population," or who have the virus, will die if they follow the president's example.

On Tuesday, however, the VA secretary emphasized that he received clear instructions from the president "to preserve and protect life."

"Those of us who have had a military life -- some of us around this table -- we've been taking this drug for years," he said of hydroxychloroquine.

"And what we did when this virus first hit us was to every means necessary to help preserve life," he said.

"So I want to knock down the story that this is somehow the VA going back on what the president told us to do, which was to use every means possible to protect and preserve the lives of our veterans," he said.

Wilkie pointed out that New York Democratic Gov. Andrew Cuomo asked for "tens of thousands of doses" of hydroxychloroquine for "frontline workers."

See the remarks Tuesday by Wilkie, Azar and Trump:

Wilkie had been asked by President Trump to respond after a reporter asked the president why he was taking hydroxychloroquine as a prophylactic when the FDA has advised that it not be used outside of a hospital setting.

Trump said that is not what he had been told, calling on Secretary of Health and Human Services Alex Azar for input.

Azar pointed out that hydroxychloroquine has been approved by the FDA for decades for treatment of malaria, lupus and RA.

"Once a drug has been approved and on the market, a doctor can prescribe it for "off-label" purposes, which are "indications that are not yet proven and not yet on the label," he explained.

Calling the study on veterans "phony," Trump said the patients reviewed were "extremely sick people" near death with heart problems or diabetes.

He pointed to "great studies" on the drug from Italy, France, Spain, the U.S., and other countries.

The president emphasized that taking the drug as a prophylactic is a "line of defense" against the virus that is "very inexpensive" but must be done in consultation with a doctor.

"I think it gives you an additional level of safety," he said. "But you can ask many doctors who are in favor of it. Many frontline workers won't go there unless they have hydroxy."

Trump quipped that it's "gotten a bad reputation only becaue I'm promoting it."

"So obviously I'm a very bad promoter," he said. "If anybody else were promoting it, they would say this is the greatest thing ever."

Earlier Tuesday, Trump said that along with vaccines, many therapies are in the works, including a "cure."

"They are working on a cure, and we have more than one doing it, and very advanced," he said.

The infectious disease expert Smith argued in an April 28 interview with Fox News' Laura Ingraham that in the University of Virginia study, not one dosage was listed of hydroxychloroquine or azithromycin and "not one person in that paper saw one COVID patient."

Published in the medRxiv online depository, the study was not peer-reviewed. It analyzed the medical records of 368 male veterans hospitalized with confirmed coronavirus infection at Veterans Health Administration medical centers who died or were discharged by April 11.

About 28% of patients who were given hydroxychloroquine in addition to the usual care died compared to 11% who received routine care alone, the study concluded.

But only three of the researchers were physicians and all of them were trained in ophthalmology, Smith argued.

"It's a sham. It's a shame on UVA," he said. "I sent an email to the dean of the medical school at UVA. I have not heard back from them. It is an embarrassment that UVA allows this thing to be called a study."

At the same time, Smith declared he had seen 100% success in his treatment of 72 seriously ill COVID-19 patients with hydroxchloroquine and azithromycin.

"I think this is the beginning of the end of the pandemic," he said in an April 1 interview with Ingraham. "I'm very serious."

Cavuto: 'This will kill you'

On Monday, Cavuto cited the University of Virginia study, saying it found that "those with vulnerable conditions, respiratory conditions, heart ailment, they died."

He also pointed to a recent study published in the Journal of the American Medical Association of 1,438 individuals in the New York City area who were patients in 25 different hospitals in March. It found no statistical difference between treatment with hydroxychloroquine and no treatment. Another study in Manhattan showed the same.

The Fox News host insisted the Virginia study on veterans "wasn't a loaded politically one."

"It was a test on patients there, and those who took it in a vulnerable population, including those with respiratory or other conditions, they died," he said.

"I want to stress again, they died," said Cavuto.

Fox News's Neil Cavuto is stunned by Trump's announcement that he's taking hydroxychloroquine: "If you are in a risky population here, and you are taking this as a preventative treatment ... it will kill you. I cannot stress enough. This will kill you." pic.twitter.com/e6D5alfAgc

Cavuto then interviewed Dr. Bob Lahita, the chairman of medicine at St. Joseph University Hospital, who said he was surprised by Trump's statement.

The physician said he and his colleagues used it two and a half months ago on patients who were very ill, "and we saw absolutely no effect."

However, Cavuto then spoke to another physician, Fox News medical contributor Dr. Janette Nesheiwat, who said she thought it was "very smart" for Trump to take the drug as a "prophylactic preventative measure" after members of his administration tested positive for the virus.

She cautioned that people who have "underlying cardiac arrhythmia" should be careful, using it only if they are "on their death bed" as a last resort.

The doctor has personally prescribed hydroxychloroquine to many of her patients.

"For some of them, they said it helped tremendously," she said, while for others  "it didn't make much of a change."

She said it's best to consult one's doctor.

"It's not going to be good for everyone, but it may be beneficial and potentially lifesaving for others," she said.

Nesheiwat said physicians should have hydroxychloroquine "in their tool box" along with another drug approved for FDA emergency use amid clinical trials, remdesivir, "while we wait for a vaccine to become approved and for other drugs to get on the market."

Trump noted Monday that Bright signed off on the FDA's emergency use of hydroxychloroquine. However, Bright said in his whistleblower complaint that he opposed the use of the drug for COVID-19 while Health and Human Services Secretary Alex Azar sought an "expanded use protocol." Bright said the emergency-use authorization was a compromise.

At the hearing, two lawmakers who are physicians, Reps. Michael Burgess of Texas and Larry Bucshon of Indiana, said they had heard from many doctors who have reported success treating patients with protocols of hydroxychloroquine and azithromycin, and sometimes zinc.

"They are recording significant benefits if it is used early enough in the course," Burgess said.

Bright testified to the committee Thursday he became aware of "the anecdotal reports" of hydroxychloroquine's efficacy with COVID-19 but said it hasn't shown in randomized studies "an overwhelming level of evidence that it has benefit."

Bucshon, however, noting he is a cardiovascular and thoracic surgeon who has been in health care for 30 years, said doctors "across the country will use drugs off-label in a circumstance where they don't have or they don't see a viable alternative."

He acknowledged the need for double blind studies, but "in this situation, I think a little bit of understanding and leeway from the federal government is in order."

"We do want to ensure the safety," he said, but hydroxychloroquine "has been proven safe for many, many years in appropriate doses."

He acknowledged it can lead to cardiac arrhythmias if not used properly.

"But when states tried to stop doctors from using [hydroxychloroquine], there was such a backlash they had to back away from it, because the physicians in the community wanted to use it," Bucshon said.

"So doctors like me out in the real world, if things are working, even anecdotally, they're not going to wait for the government bureaucracy to approve it," he said.

"This is why doctors are using it."

The data eventually will show whether or not it should be used for COVID-19, he said, but lives are on the line now.

"If two years from now we have the studies, and we say, 'Hey, that stuff really would have worked, and the government stopped that from being used,' if I was the family of a person that was stopped from getting hydroxychloroquine, I'd be pretty mad," the Indiana lawmaker said.