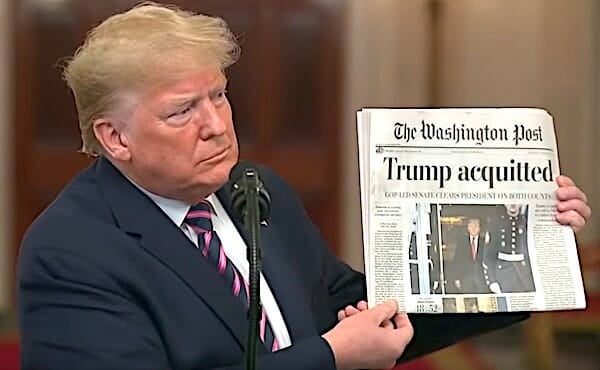 President Donald J. Trump addresses his remarks Thursday, Feb. 6, 2020 in the East Room of the White House, in response to being acquitted of two impeachment charges. (Video screenshot)

A former president of CBS News believes it's too late to correct the left-leaning bias of establishment media, contending it has passed its tipping point.

Van Gordon Sauter writes in a Wall Street Journal column that a correction would be commercially unviable, and the best solution may be an honest embrace of bias.

Sauter recalls hearing President Reagan's foreign policy adviser Jeane Kirkpatrick, a onetime Democrat, telling him 35 years ago that it was "too late" for the liberal media to turn to the center.

Calling her "prophetic," he noted the top newspapers, three broadcast networks and two of the three leading cable news sources "are unrelentingly liberal in their fear and loathing of President Trump."

"The news media is catching up with the liberalism of the professoriate, the entertainment industry, upscale magazines and the literary world," he writes. "Recent arrivals are the late-night TV hosts who have broken the boundaries of what was considered acceptable political humor for networks."

He observers "that much of journalism has become the clarion voice of the 'resistance,' dedicated to ousting the president, even though he was legally elected and, according to the polls, enjoys the support of about 44% of likely 2020 voters."

If Trump wins in November, they will likely find him "more dangerous and offensive in a second term than in the first."

He says media seem uninterested in issues of bias.

"But wouldn’t a softening of its editorial orientation bring new readers or viewers?" he asks.

"Probably not. The growth of new customers would be more than offset by the defection of outraged members of the current audience," he believes. "The news media seems very comfortable with its product and ability to sell it."

Sauter suggests publishers, editors and reporters just admit: "Yes, I am left of center! I’m proud of it. I think our reporting is accurate. It best serves the public. And the credibility of the media. So there!"

"Publications open about their bias might feel freer to focus on the specifics: story selection, presentation, facts, fairness, balance. Not devoid of subtlety for sure, but manageable," he argues.

Ultimately, Sauter concludes, America "won't reunite until far more people can look at a news story in print or on the screen and, of all things, believe it."