This past week, I was watching "The Story with Martha MacCallum" on Fox News. She was interviewing former U.S. Ambassador to the U.N. Nikki Haley, who was weighing in on U.S. relations with China and the coronavirus pandemic. Haley's main point was that China poses far more of a threat than just their inept COVID-19 coverup and containment actions.

For example, they discussed what MacCallum called the "astronomical number" of pharmaceuticals for which the U.S. is dependent upon China. If you don't know just how astronomical they are, consider this chart that MacCallum inserted into her broadcast: 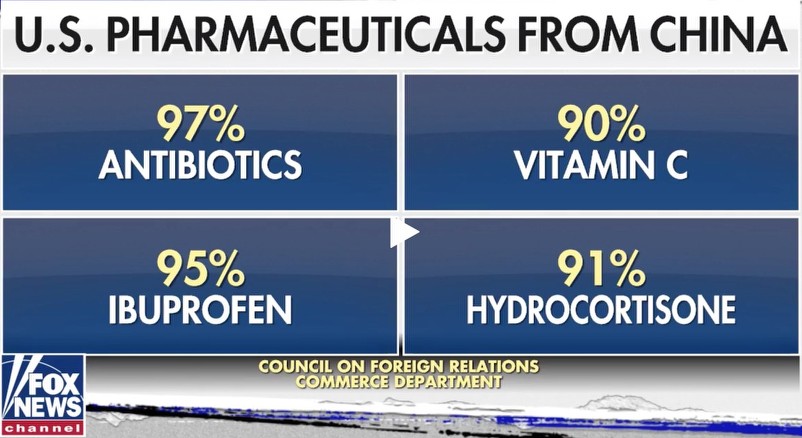 Crazy, isn't it? From over-the-counter to prescription meds and even vitamins, we've for all practical purposes given China power over the health of 300 million Americans.

How ironic and tragic is the fact that the very country in which COVID-19 developed also happens to be the country upon which we are over 90 percent dependent for medicines. What are the odds? And consider that China already has four companies working on vaccines for COVID-19, about which Nikki Haley noted, "So they are already one up on America there, too." Seems no different than a drug dealer who is also the 12-step recovery counselor for the heroin addict.

To add insult to injury, in mid-March, as COVID-19 continued its escalating march across America, China threatened to withhold all of its medicine exports in addition to face masks and other medical gear in order to throw America "into the mighty sea of the coronavirus." Is Washington listening?

The Epoch Times cited Rosemary Gibson, a senior adviser at the Hastings Center, a bioethics research institute and co-author of "China RX: Exposing the Risks of America's Dependence on China for Medicine." She said, "The United States is 'dramatically dependent' on China for medical supplies that include among them masks, scans, prescription drugs, and their ingredients."

She also explained that America's reliance on China for medical supplies stems from the Communist regime's engagement in a "strategy of illegal trade practices to fix prices to dump products [and] medicines on the global market at below-market prices."

She added, "They subsidize their domestic companies; they don't want to import our products and so that has driven out Western companies. It's not just lower costs, it's market manipulation."

She concluded with this sobering truth that affects far more than our pocketbooks: "Our dependence is a risk to our national security. … This is about life and death here. This is about survivability."

No wonder Robert J. Bunker, adjunct research professor at the U.S. Army War College's Strategic Studies Institute, told The Epoch Times it would be a "massive strategic mistake for the United States to allow itself to continue to be vulnerable to Chinese 'pharmaceutical blackmail' potentials."

America's entire relationship with China would be completely shocking and unbelievable if it were not a cold reality. How completely irresponsible of former administrations in Washington that have allowed and negotiated this pharmaceutical snowball. Washington has created and enabled America's vassal slavery to China with drugs and our national debt. And the truth is, too much of past American business has further empowered and emboldened China because of our own greed. How ridiculous it is that America traded a Cold War for a commerce war in which we've fed the growth and victory of the greatest Communist overlord in the world.

But China hasn't won yet. It's time for all this to change, immediately. It's time for America to resurrect and regrow our pride of "Made in the USA" again.

I am grateful for President Trump's goal of having 94% of antibiotics produced in the U.S. within two years, as he also told Fox News' Martha MacCallum this past week in an interview at the Lincoln Memorial.

In March, White House trade adviser Peter Navarro, director of the Office of Trade and Manufacturing Policy, told CNBC: "The essence of [President Trump's] order … is to bring all of that home so that we don't have to worry about foreign dependency."

Americans also need to continue to push their representatives for bilateral support and earnest work across the aisles regarding America's decoupling from China.

And just this past week, Rep. Mark Green, R-Tenn., was finalizing details to introduce a bill to help companies move their manufacturing from China to the United States by allowing them to deduct the entire cost of capital spending associated with their relocation – known as "immediate expensing," which is paid for with money collected from U.S. tariffs on Chinese imports.

Gordon Chang, author of "The Coming Collapse of China," wrote that decoupling from the Communist regime will not be easy, but it is mandatory if America is to survive let alone thrive into the future. It starts with the pharmaceutical and medical supplies industry, but must continue with technology, electronics and telecommunications.

After decades of feeding the beast, it appears that Washington and America are finally learning and fighting Communist China's regime and strategies. However they are packaged, their end game and goal is the same: world dominance.

These tough international lessons remind me of two great quotes.

The first is from Winston Churchill who said, "Trying to maintain good relations with a Communist is like wooing a crocodile. You do not know whether to tickle it under the chin or beat it over the head. When it opens its mouth, you cannot tell whether it is trying to smile or preparing to eat you up."

The second quote comes from a line in Alfred Hitchcock's awesome and classic 1959 thriller, "North by Northwest," when an undercover professor of U.S. intelligence told Cary Grant's fugitive character: "War is hell, even when it's a cold one."