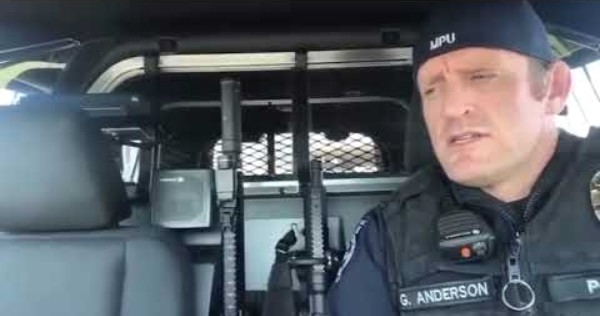 The Port of Seattle Police Department has suspended an officer who chastised colleagues across the nation who he says are enforcing coronavirus lockdown orders in violation of their oaths to uphold the U.S. Constitution.

Greg Anderson circulated his views in a viral, eight-minute video in which he says he's "seen officers nationwide enforcing these tyrannical orders."

"Every time I turn on the TV, I see people getting cited for going to church, for travelling on the roadways, for going surfing, opening their businesses, going to the park with their families, or doing nails out of their own house," Anderson says.

The chief of the Port of Seattle Police Department, Rod Covey, posted a statement on the port's website explaining Anderson is "on paid administrative leave while we look into allegations that he violated our policy on the use of social media."

"I hired Greg, and he and I have always had a mutually respectful relationship," Covey writes. "That respect continues to this day.  He is clearly a good police officer and an exceptional American.  That said, as a police officer wearing one of our uniforms, his right to speech has limitations on which he has been well-trained and that he has understood since joining the policing profession. "

In his video, Anderson reads a portion of the Bill of Rights.

"Stopping people and asking for their papers?" Anderson asks. "What is this, 1930s Germany? Are you the Gestapo? You don't get to stop people unless you have reasonable suspicion or probable cause that they have committed a crime."

Anderson says the power he and his colleagues have as law enforcement officers "is nothing more than a facade."

Anderson predicts it won't go well for officers who continue to abuse their power.

"I am afraid that with these actions ... you are going to wake a sleeping giant," he says. "They are going to be put in a position where they won’t have their rights trampled anymore.

"I think what is going to happen if this continues is we’re gonna see bloodshed in the streets."

Anderson says it is time for fellow law-enforcement officers to wake up.

"You need to ask yourself one question, and that is, 'Am I doing the right thing?'"

'Time to pull the plug'

Anderson says that in the hours after he posted the video, he received praise from his superiors.

But after it received some 400,000 views, his supervisor told him "it's time to pull the plug on it."

The supervisor explained he had been "directed" to order that he remove the video.

Anderson refused, saying officers from all over the country were calling him.

The supervisor called back and warned that if he didn't remove it and accept a letter for reprimand, his superiors would "take a completely different approach to this."

Anderson said he was told by the chief, Covey, that if "you openly defy your governor, you cannot be a police officer in the state of Washington."

Anderson said he replied, "Maybe I’m not meant to be a police officer in the state of Washington."

See Anderson's video about his suspension: