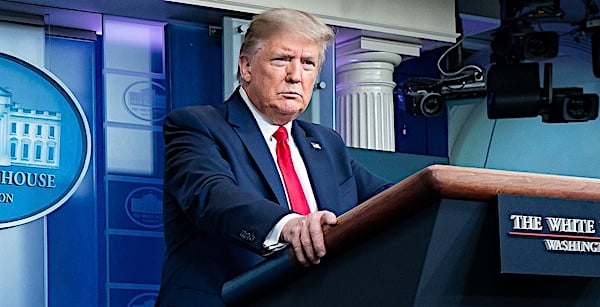 An editorial from the New York Sun called it a "memorable moment" when a "center-left" Supreme Court associate justice on Tuesday took a whack at U.S. House members who are demanding access to years of President Trump's tax returns.

The fight is over whether House committees can subpoena the records. They have simply demanded them, and President Trump's lawyers have argued they are not entitled to them.

The Sun board said the moment was "riveting," but that might have been an understatement.

The challenge came from Justice Stephen Breyer, who routinely votes with the court's left wing.

"The practical-minded, center-left justice hauled off and, so to speak, smote the lawyer for the House of Representatives with the jawbone of an a-- ... pardon ... of Old Joe McCarthy," the editorial said.

"It was the bluntest warning of the kind of demagoguery the court could unleash upon the president."

It happened during the arguments over subpoenas from three House committees in yet another investigation of President Trump, this time into his taxes "and other papers."

"The House’s lawyer, Douglas Letter, was trying to convince the court that the president himself wouldn’t be burdened. That’s when Justice Breyer wheeled on the House counsel to say that the subpoenas he’d seen certainly could impose a burden on the presidency," the Sun said.

"Such subpoenas, the justice said, 'apply to 15 Trump-affiliated entities. They ask for all documents related to opening of accounts, due diligence, closings, requests for information by other parties, etcetera.  ... If somebody subpoenaed you for that information or subpoenaed your tax accountant or subpoenaed somebody in your business, wouldn’t you at least want to know what was being turned over?'"

The justice said he's looking at how the decision will impact events to come.

"The fact that what I hold today will also apply to a future Senator McCarthy asking a future Franklin Roosevelt or a future Harry Truman exactly the same questions, that bothers me."

House lawyers "cooed" that none of those getting the subpoenas has yet complained about burdens, the Sun board wrote.

"'I'm sorry to interrupt you,' Justice Breyer interrupted, having had his fill of evasions. 'I’m not talking about their burden. I’m talking about the president’s burden — in having to monitor, decide if there are privileges, figure out what his answers are to all those documents you are requesting which go, in my opinion, way, way, way beyond just tax returns.'"

The editorial said: "Whether Justice Breyer will decide the case is hard to guess. He also seemed perplexed as to why courts couldn’t weigh the presidential burdens in the ordinary course. The court more generally was hard to read, too, on whether it will permit the Manhattan DA, Cyrus Vance, Jr., to go after the President’s tax returns and other information being held by the accounting firm of Mazars. That, of course, is a state case."

The newspaper said it's own reading of the Constitution "puts us in mind that the parchment favors the president on both sets of subpoenas — those from the House and those from New York County."

"We’d block Congress on, among other points, separated powers, enumerated powers, and the prohibition on bills of attainder, in which a legislature pursues an individual. We’d block Mr. Vance over federal supremacy and Thomas Jefferson’s warning."