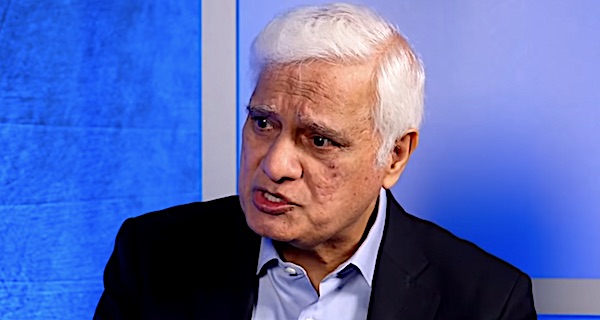 Renowned evangelical Christian apologist Ravi Zacharias has died at age 74 after a battle with cancer.

He was praised by evangelist Franklin Graham, who described Zacharias as "one of the great Christian apologists of our time, has stepped into the streets of glory and into the presence of the King of Kings and Lord of Lords."

"Don't feel sorry for Ravi – his fight with cancer is over, and he has placed his crowns at the feet of the One who deserves all glory and honor," said Graham, the son of evangelist Billy Graham and the CEO of both the Billy Graham Evangelistic Association and the relief and development group Samaritan's Purse.

He noted that Zacharias' defense of the Christian faith reached "millions worldwide."

"Ravi will be greatly missed – join me in praying for his family and loved ones in their loss," Graham said.

The Atlanta Journal-Constitution recalled Zacharias had been invited by Billy Graham to preach at the first International Conference for Itinerant Evangelists in Amsterdam in 1983 and the next year founded Ravi Zacharias International Ministries, or RZIM.

He was born in India and spent nearly 50 years responding to questions about faith.

He died in Atlanta, where RZIM is based.

Zacharias "saw the objections and questions of others not as something to be rebuffed, but as a cry of the heart that had to be answered," Michael Ramsden, president of RZIM said in a statement.

"People weren’t logical problems waiting to be solved; they were people who needed the person of Christ. Those who knew him well will remember him first for his kindness, gentleness, and generosity of spirit. The love and kindness he had come to know in and through Jesus Christ was the same love he wanted to share with all he met."

CBN reported Zacharias revealed earlier this year he had severe pain in his spine and would undergo surgery, which found a malignant tumor.

He was born Frederick Antony Ravi Kumar Zacharias in Chennai, India in 1946.

He moved to Canada in 1966 and graduated from Ontario Bible College in 1972. He married Margie and the couple moved to Illinois where he earned a Master of Divinity at Trinity Evangelical Divinity School.