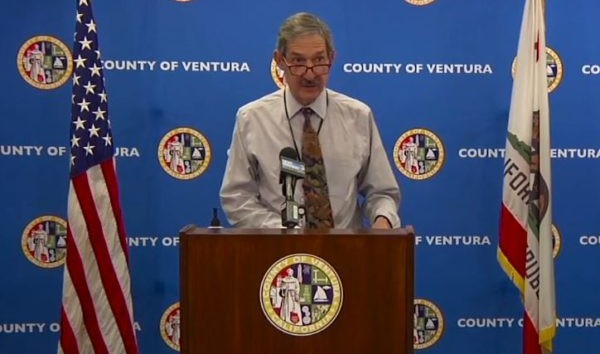 When the health director for California's Ventura County declared at a news conference that he had mobilized teams who were prepared to remove people infected with the coronavirus from their homes, some residents took him at his word.

"Forcibly remove people from their homes and families??? Do you hear yourself, Levin??" wrote one in the comment section of a Facebook post of video of the news conference Monday.

The reference was to Dr. Robert Levin, the county health director, who was announcing the launch of a pilot program called Community Contact Tracing that deploys health workers who identify and trace people infected with the coronavirus. It's actually a revamping and expansion of an existing effort to comply with an order from California Democratic Gov. Gavin Newsom. The ability to trace the infected and their contacts is one of his indicators for loosening state-wide stay-at-home orders.

"We will isolate every one of them, and we will find every one of their contacts," Levin told residents of the Southern California county at the televised conference Monday. "And we will make sure they are quarantined and will check in with them every day."

What really drew the attention of some was Levin's example of what might happen to an infected person who lives with three or four people in a home with only one bathroom.

"We're not going to be able to keep that person in the home," he said. "Every person we are isolating needs to have their own bathroom.

"So we will be moving people like this into other kinds of housing that we have available," said Levin, where the county will provide food and other necessities.

'We're not going to 'rip people out of their houses'

Are governments looking at forcibly removing people from their homes in the coronavirus pandemic?
93% (180 Votes)
7% (13 Votes)

The county's public information officer, Ashley Bautista, told WND on Wednesday she had been dealing with the reponses of confused and angry citizens.

"So people were feeling like Dr. Levin was saying that the county is going to rip people out of their houses, and that's just not the case," she said.

Bautista explained that people who test positive for COVID-19 "are given guidance, and if they can't safely isolate, and they want a safe place to stay to protect their family, we have alternative options."

No one has been forced to isolate, she said.

"But, of course, legally speaking, a public health officer has the authority to do that."

Bautista said Levin "has not done that, nor does he recommend doing that."

She promised to send WND a citation of the law granting authority to the county health director to forcibly remove people from their homes, but the email had not been received by the time this article was published.  According to the National Conference of State Legislatures, every state, the District of Columbia and most territories have laws authorizing quarantine and isolation, usually through the state’s health authority.

"On social media, people really took it like the government is going to come in and take me away from my family," she told WND. "It's not even like that it all. It's just, hey, this is an option. If you need isolation, hey, we've got a hotel for you. We'll even deliver you restaurant meals. I mean, like that's a good deal."

She acknowledged, however, that Levin made it sound as if he would forcibly remove people from their homes.

"Oh, that is what he said," Bautista affirmed. "He said that people were going to be isolated. So he misspoke. But that wasn't the intention."

Bautista said she hoped that the matter would be resolved when Levin later clarified his remarks at the 1 p.m. news conference Wednesday.

"I just think there's a heightened sense of anger and fear in our community, as this drums along, but that has never been the intention of the county to take people from their home," Bautista said. "That is just an option (for people) at this point."

At the news conference later, Levin said he had been told that on Monday he "gave people the impression that if you were isolated you would be taken out of your home" and "sequestered."

Levin said people who are infected and don't want to stay in their homes do have the option, however.

"We'll work with you to find a place to stay, and it's likely to be a hotel or a motel," he said.

"But we will desire for you to have your own room in your place of residence and a bathroom that can be dedicated to just you."

He said there have been 600 cornavirus cases in the county, and only in "very, very unusual circumstances have we had to put someone up in a motel or a hotel, and this is for reasons that have nothing to do with your choice of staying in your household."