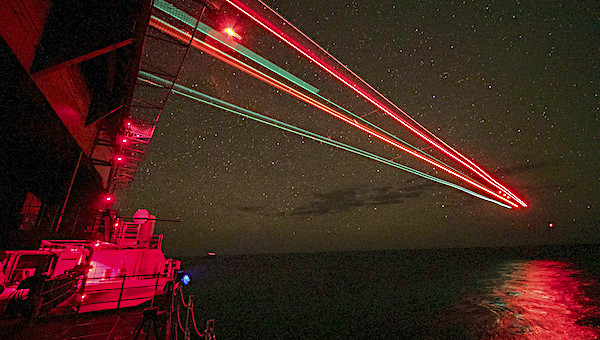 Gulf Island Shipyards announced a $130 million deal in March to build two Navy rescue vessels, one more in a long line of contracts the Houston-based company has received from the U.S. Department of Defense in the past 20 years.

If the company can show it used the money to make payroll or save jobs, it probably won’t have to pay it back at all. Otherwise, the money will be considered a loan carrying the very low interest rate of 1%.

Gulf Island is one of dozens of publicly traded firms with active, multimillion-dollar defense contracts that are receiving CARES Act funding through the Paycheck Protection Program.

Defense contractors, deemed part of the critical workforce along with health care, agriculture, public safety and several other industries, have seen few closures and have remained mostly solvent and working.

Fewer than 3% of defense contractors have been forced to close during the virus outbreak, Ellen Lord, undersecretary of defense for acquisition and sustainment, told reporters last month. But the nation’s defense budget could see a 2 to 3 percent dip as a result of the economic fallout of the coronavirus, the Washington Post reported last week.

With the money flowing so fast and to so many public companies, government watchdogs are mining SEC filings to discover that many recipients are not as needy as others.

Federal prosecutors have vowed to monitor recipients of the $660 billion Paycheck Protection Program to ensure compliance with the dictates of the law.

So far, more than 30% of the PPP funds secured by private companies have been returned by those corporations – including Shake Shack and the Los Angeles Lakers.

Publicly traded companies should have been ineligible for the money from the outset of the PPP program, said Kyle Herrig, president of Accountable.us.

“The program was sold as something to help small business, not someone on the stock exchange,” Herrig said. He cited a line on the application for the funding.

“It asks the applicant to verify that ‘current economic uncertainty makes this loan request necessary to support the ongoing operations of the applicant,’ ” Herrig said. “If you are publicly traded, you likely have access to other capital markets.”

Robert E. Jones, a CPA who handled defense contracts for a private company for 15 years, said that while the government did a good job by quickly by getting money into the hands of small business owners, the speed with which it was done will create problems in the future. “There is no clear guidance for anyone taking this money,” he said, noting that when it comes to government contractors, the rules are even murkier.

“There is no way to tell if you are running afoul of the law,” Jones said. “They are going to have to deal with interpretations of the DoD, the SBA and the IRS, and it’s likely there will be conflict among those three groups.”

Which also sounds like a scenario for large sums of wasteful spending, despite the best intentions, he acknowledged.

Business structures are often complex arrangements with numerous subsidiaries and divisions, not necessarily due to malfeasance or ill intent but instead because operations vary, as in the case of Gulf Island, which has several divisions.

In announcing an increase in consolidated revenue earlier this month, Gulf Island CEO Richard Heo said in a May 9 press release that the company was deemed an essential business but “in this challenging and uncertain time, the PPP loan proceeds provide necessary liquidity to defray payroll and benefit costs, including maximizing our ability to retain our workforce, execute our current backlog and compete for new project awards.”

Heo did not respond to an email seeking an interview.

In its May 7 investor call, CFO Mark Hess announced the receipt of $4.9 million in PPP money. He cited ENGlobal’s size – about 250 employees – as well as its “depressed stock price” and “lack of volume” as reasons for taking the funding.

“We simply do not have the same access to capital markets as larger public companies do,” Hess said. “Also we do not have a financial sponsor to provide access to funds when needed. Because of these factors, we are in many ways more like small privately held companies than a public company.”

Hess did not respond to an email seeking comment.

Twin Disc, a Wisconsin-based defense contractor with around 900 employees and $40 million in defense contracts since 2000, has not shut down its North American operations, but has been operating with a smaller crew. Twin Disc received an $8.2 million PPP payment in April.

“Do we think that other small businesses should have gotten the PPP funding?” CEO John Batten said in a May 1 investor call. “Yes. Did we follow the rules laid out in the CARES Act? Yes, and we acted absolutely in good faith. With the PPP funds we have received, we brought people back in the scene.”

Batten did not respond to an email seeking comment.

As recipients of the PPP funds have been made public, some companies have returned the money, including public firms with defense deals.

Ultralife Corporation, a New Jersey-based battery maker that has secured $230 million in defense contracts in the past 20 years, returned the $3.4 million in paycheck protection money it received within 10 days.

The company last month announced a 37% increase in revenue in the first quarter of 2020, along with a 24% jump in defense sales.

“The company liquidity remains solid,” Chief Financial Officer Philip Fain said on its quarterly earnings call with analysts. Fain did not respond to a call or email seeking comment.

Similarly flourishing public companies, especially those with reliable government contracts, may or may not continue to heed the public pressure to return the money.

“It’s not entirely their fault,” said Sean Moulton, senior policy analyst for Project on Government Oversight, an advocacy group. “But they shouldn’t be putting their hand out when they are doing stock buybacks and have lines of equity to tap before taking taxpayer money.”

The dump of cash was a hasty move that created unnecessary confusion, casting some public businesses in a poor light, Moulton said.

The trouble now is tracking the money to ensure it has been spent in accordance with the rules, he said. Most will mention the infusion in their investor calls and corporate filings.

“But we can be sure it’s not all of them,” Moulton said.

WND News Services
These reports are produced by another news agency, and the editors of WND believe you'll find it of interest.
Australian city of Melbourne locked down for 6th time
Australian health official tells grandparents: 'Don't go anywhere near your grandkids'
Some people who refuse to get vaccinated may not be eligible to receive unemployment benefits
Where have all the bullets gone?
New York City small business owner refuses to enforce vaccine passport
See more...