Americans are confronted with it every day. More and more politicians across the nation are suddenly acting like full-blown dictators:

* "We will arrest you and we will take you to jail. Period. We're not playing games," said Chicago Mayor Lori Lightfoot to city residents attending parties in violation of her stay-at-home orders. Meanwhile, Lightfoot managed to slip out and get her hair done while shutting down all of Chicago’s hair salons for everyone else, later explaining, “I take my personal hygiene very seriously.”

* Speaking of salons, Dallas Judge Eric Moye sentenced salon owner Shelly Luther to seven days in jail and a $3,500 fine for daring to open her business so she could feed her children. After Texas’ governor, lieutenant governor, attorney general and Supreme Court intervened, Luther was freed from jail.

* Ventura County, Calif., health director Dr. Robert Levin announced his department would forcibly remove COVID-infected people from their own homes and put them “into other kinds of housing that we have available” if they couldn’t sufficiently isolate from family members in their home. Under fire, he later said he didn’t mean what he said.

* Michigan Gov. Gretchen Whitmer, after ordering that "All public and private gatherings of any size are prohibited" in the state, was confronted by angry demonstrators packing the capitol building to protest her extreme lockdown, which had already thrown over one million people out of work. Whitmer responded defiantly by signing a new executive order extending her radical lockdown for yet another month.

This dictator phenomenon, manifesting across the country particularly in blue states, is spectacularly exposed in the newest issue of WND’s acclaimed Whistleblower magazine, titled “DRUNK ON POWER: Pandemic crisis reveals many politicians’ love affair with totalitarianism.” 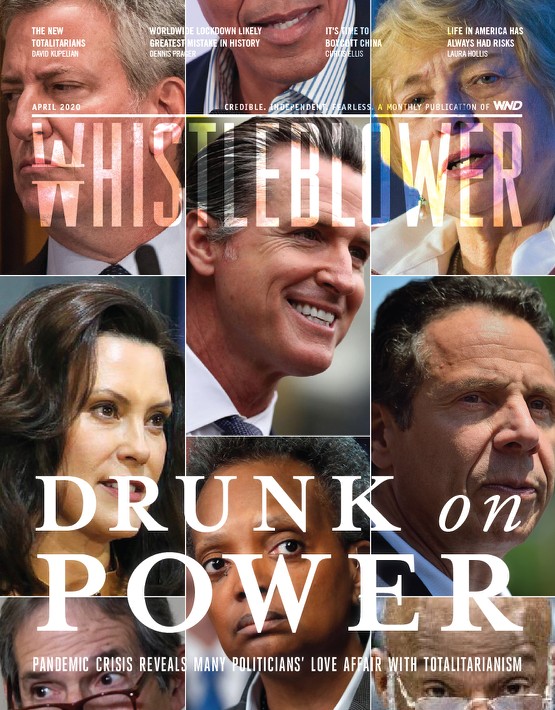 There appears to be no limit to either the dictatorial tendencies of many Democrat politicians – or to their hypocrisy. Former President Barack Obama was photographed golfing on a Virginia golf course 40 miles from his Washington, D.C. home, while his wife, former first lady Michelle Obama, was busy recording a robocall sternly urging all D.C. residents “to stay home except if you need essential healthcare, essential food or supplies, or to go to your essential job.” And while New York Gov. Andrew Cuomo was forcing nursing homes to accept COVID-infected patients, resulting in over 5,000 deaths, New York City’s mayor, Bill de Blasio, has been urging residents to snitch on one another – a hallmark of brutal communist dictatorships – over supposed violations of his lockdown and social-distancing mandates, which he himself doesn’t follow.

Meanwhile, police are being sent out into all these communities to enforce the heavy-handed executive orders of their state’s governors and mayors as though they were law. Thus a dad playing T-ball with his 6-year-old daughter in an empty Colorado park was arrested and handcuffed for violating social distancing guidelines. A California surfer, utterly alone in the ocean, was arrested and handcuffed for violating the state’s stay-at-home order. A Wisconsin mother was harassed by police at her home for arranging a play date for her daughter. On and on it goes.

Summarizing this bizarrely totalitarian reaction of many leaders, judges and authorities to the coronavirus pandemic, Texas Rep. Dan Crenshaw put it succinctly: “They think we’re stupid, and they’re drunk on power.”

On top of all this, of course, congressional Democrats led by House Speaker Nancy Pelosi are obsessed with using the pandemic crisis as a pretext for completely transforming America’s economic, electoral and governmental system, including by enacting multi-trillion-dollar spending bills to essentially buy the votes of their core constituencies, including illegal aliens.

Highlights of “DRUNK ON POWER” include:

"Until recently,” notes Whistleblower Editor David Kupelian, “the Democratic Party and its propaganda wing, the elite news media, had only fake crises to exploit: ‘Trump colluded with Putin to steal the election from Hillary,’ ‘The world is ending soon due to global warming,’ ‘Trump is like Hitler and is creating concentration camps filled with caged children all across America,’ ‘Brett Kavanaugh is a serial rapist,’ ‘Trump had a phone call we didn’t like with the Ukrainian president, so he must be impeached,’ and so on.

"But now they have a real crisis – and they’re not about to waste it. Crises bring the left’s latent lust for raw power to the surface. As former leftist leader David Horowitz has so aptly put it, ‘Inside every progressive is a totalitarian screaming to get out.’

“Guess what,” concludes Kupelian. “They’re out.” Yet there are politicians, bureaucrats and members of the media elite who want to trample Americans' core freedoms, says LaPierre. They say Americans can't be trusted to own a firearm, and that core freedoms are the cause of crime and terrorism. They say the government has the right to determine whether citizens need to own a gun. They imply Americans have no right to self-defense. And they portray law-abiding gun owners as the members of some lunatic fringe.

This indispensable book contains battle-tested arguments and an arsenal of facts, figures and anecdotes that freedom advocates can use every day to preserve, protect and defend the Second Amendment.

About the Author: Wayne LaPierre has served as the executive vice president and chief executive officer of the National Rifle Association of America since 1991. As the principal spokesman for the NRA’s 5 million members, LaPierre is regularly quoted, debated and interviewed throughout the national and international news media. Special bonus! In addition, when you subscribe, renew or give a gift Whistleblower subscription today, you’ll also get the terrific, must-see, inspirational movie "Every Boy Needs a Hero," from the makers of the blockbuster Christian film "Alone Yet Not Alone."

"'Hero' is an excellent movie about God turning a man’s heart to his son and a son learning to forgive his father. The opening is powerful. The ending is heartrending. The drama, the acting, the jeopardy work well throughout the whole movie. This is one of the few movies that Movieguide can actually say GO SEE IT." – Dr. Ted Baehr, founder of Movieguide

If you prefer, you may order a single copy of the April 2020 issue, “DRUNK ON POWER.” Or GET THE DIGITAL VERSION HERE!