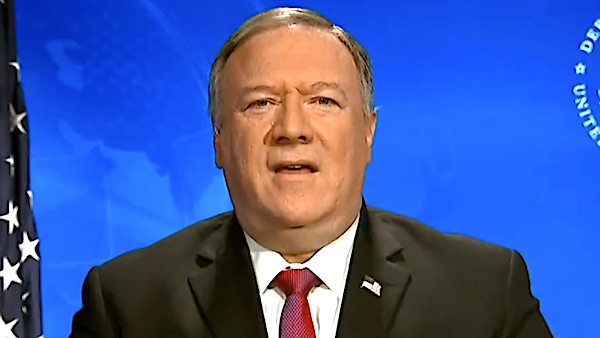 Secretary of State Mike Pompeo said Sunday that there’s “enormous evidence” backing the theory that the novel coronavirus originated from the Wuhan Institute of Virology.

“There’s enormous evidence that that’s where this began,” Pompeo said on ABC’s “This Week.”

“We have said from the beginning, this virus originated in Wuhan, China. We took a lot of grief for that from the outset. But I think the whole world can see now.”

“Remember, China has a history of infecting the world and they have a history of running sub-standard laboratories,” Pompeo added. These aren’t the first times that we have had the world exposed to viruses as a result of failures in a Chinese lab.”

Pompeo was likely referring to the fact that SARS leaked at least twice from the Beijing Institute of Virology in 2004.

The secretary of state added that China “did all that it could to make sure the world didn’t learn in a timely fashion” about the coronavirus outbreak at its onset.

“We’ve seen the fact that they kicked journalists out, we saw the fact that those who were trying to report on this — medical professionals — inside of China were silenced,” Pompeo said. “All the kind of things that authoritarian regimes do.”

NEW: Secretary of State Mike Pompeo tells @MarthaRaddatz China “did all that it could to make sure the world didn’t learn in a timely fashion” about COVID-19.

"It was a classic communist disinformation effort," he adds and they will be held "accountable." https://t.co/ADn28E1wPh pic.twitter.com/5KvHPy2eZw

The majority of the 17 U.S. intelligence community agencies believe coronavirus accidentally leaked out of a laboratory in Wuhan, a senior intelligence official told the Daily Caller News Foundation on Saturday.

The Office of the Director of National Intelligence issued a statement Thursday confirming it is “rigorously examining emerging information and intelligence” to determine whether the coronavirus outbreak originated through natural human contact with infected animals or through a laboratory accident in Wuhan.

The ODNI made clear in its statement that it agrees with the widespread scientific consensus that the coronavirus “was not manmade or genetically modified,” a blow to the conspiracy theory that the virus could be a Chinese-manufactured bioweapon.