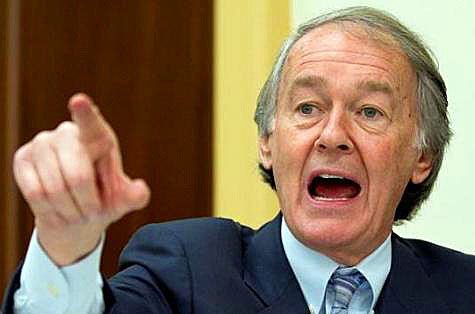 Sen. Ed Markey of Massachusetts used a politically-motivated research and a study based on 15-year-old data from Europe to suggest that the agency’s regulatory work is increasing the harm of coronavirus on minority groups, Wheeler said in an exclusive interview with the Daily Caller News Foundation.

“Shame on Senator Markey for politicizing a study like this. It’s amazing that in a political body like the senate somebody could go way over the top in politicking COVID-19 like he did. I was very surprised,” Wheeler told the DCNF.

Wheeler had a tense interaction with the Markey and Sen. Tom Carper of Delaware during a May 20 Senate Environment and Public Works Committee oversight hearing.

Markey demanded Wheeler apologize “to people of color in our country for what you are doing.”

“Shame on you,” Markey said during the hearing, while Carper harangued the EPA for doing the “opposite of what it should have been doing during this pandemic.”

Both Democrats brought up a Harvard T.H. Chan School of Public Health study, published April 4, which claimed that an increase in long-term exposure to particulate matter (PM) leads to an 8% increase in the coronavirus death rate. Areas with elevated levels of pollution are likely to experience higher death rates during the pandemic, the research based on analysis of more than 3,000 U.S. counties claimed.

“This study provides evidence that counties that have more polluted air will experience higher risks of death for Covid-19,” Francesca Dominici, a professor of biostatistics at Harvard who led the study, told The News York Times in April.

Wheeler said that it might be “premature” to suggest the study’s conclusions are false, but criticized researchers for their approach.

“Researchers appear to have tried to politicize this. They included in their study that the EPA’s enforcement discretion is going to lead to more air pollution. It sounds like a mix of relevant scientific inquiry mixed with a heavy dose of biased public policy. I don’t think that makes for a good scientific study,” Wheeler said. He noted that air pollutants and emissions continue to fall.

The researchers based their conclusions on an “ill-fitting statistical model,” Wheeler said.

“There is nothing that we have done that has increased air pollution in minority communities like Sen. Markey suggests. He kept saying shame on me and he never backed it up with anything,” Wheeler told the DCNF. “Sen. Markey didn’t even ask questions. I didn’t have an opportunity.”

Carper published a staff report ahead of the hearing that cited both the Harvard study and an Italian study that used smog data from 2005 to assess potential COVID-19 casualties in 2020.

Some analysts have expressed skepticism similar to Wheeler’s. The Harvard’s study, which has yet to be peer reviewed, relies on a “statistical model that has not been tested and verified as yielding accurate predictions,” Tony Cox, who chairs the EPA’s Clean Air Scientific Advisory Committee, told the DCNF May 3.

Cox and others at EPA have said spikes in deaths in certain areas were more likely a reflection of where those regions were on the virus curve rather than pollution. Cities also have higher levels of air pollution, not to mention they have higher death rates from COVID-19, for reasons unrelated to pollution.

There are other factors that contribute to the virus’s spread. States and counties have adopted different social distancing guidelines, with states like Georgia adopting lax efforts while California adopted strict mitigation policies. The virus originated in Wuhan, China, before expanding to more than 40 countries. It has reportedly killed more than 350,000 people worldwide.

Harvard T.H. Chan School of Public Health did not respond to the DCNF’s requests for comment about its research.

The Italian study Carper highlighted in the staff report cited 15-year-old research as a way to determine the extent to which pollution could impact COVID-19 death totals. The study, published in April by researchers from the University of Siena, examined COVID-19 fatalities in Europe and found the greatest number of deaths in Northern Italy were in areas with high smog levels.

The researchers note one major caveat: “[W]ide differences among Italian regional health systems, capacity of the intensive care units in the region, and the prevention policies taken by the Government have had a paramount role in the spreading of SARS-CoV-2, presumably more than the air pollution itself. ”

Such research “is not relevant to the United States. Europe has a lot worse air quality in their cities and has higher PM levels than the U.S.,” Wheeler told the DCNF.