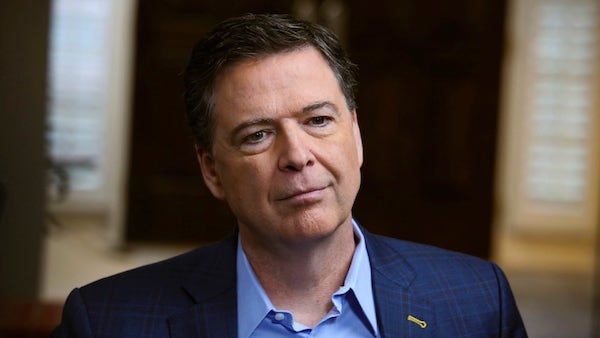 A former CIA operative says officials such as former FBI Director James Comey and former CIA Director John Brennan should be given the death penalty for their roles in the Russia-collusion investigation because they are "traitors."

"If they can prove that case and prosecute people like the James Comeys, and I think a guy like John Brennan, what I hope will happen is they will try to find whatever the most extreme form of punishment is that they can throw at these guys," Bryan Dean Wright said Saturday in an interview with Fox News.

"I'd love to see the death penalty," he said. "And boy, oh boy, I tell you, if I could flip the switch myself, I’d do it. These men are traitors."

He was reacting to the FBI's treatment of former national security adviser Michael Flynn, detailed in a series of FBI records unsealed last week, reported the Washington Examiner.

The records show FBI agents discussing how to "catch him in a lie so that he could be charged with a crime or removed from his position."

"We have these unelected bureaucrats who had decided they're going to take out a member of the Trump administration," Wright said.

"We have this very clear case of James Comey and a whole bunch of other folks on the senior level of the FBI trying to get people fired. Not because the facts warranted it or the law called for it, but because of their own personal, partisan agenda."

U.S. Attorney John Durham is conducting a criminal investigation of the origins of the Obama administration's Crossfire Hurricane probe of the Trump campaign.

According to sources, the Examiner said, Durham is reviewing Brennan's handling of a secret source said to be close to the Kremlin and his use of the unverified dossier compiled by former British spy Christopher Steele.

The opposition-research document, based on anonymous Russian sources, was funded by the Hillary Clinton campaign and the Democratic National Committee. Its major claims against Trump were debunked by Robert Mueller's special counsel investigation and none have been verified. Nevertheless, it was used as primary evidence to obtain warrants to spy on the Trump campaign.

Calling the Obama administration's actions during the 2016 "horrifying," Wright said it's now been "established that Deep State is real."

"Unelected bureaucrats deciding they are going to take out a member of the Trump administration," he said. "They decided they were going to choose the nation's political winners and losers."