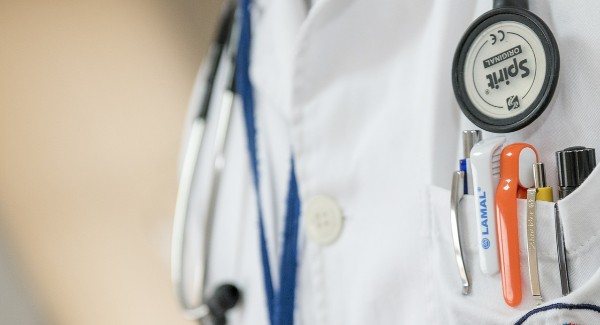 The infectious-disease specialist who briefed President Trump last month on the safety and effectiveness of hydroxychloroquine will no longer be allowed to prescribe the drug to patients at the New York City-area hospital where he has admitting privileges unless it's done in a clinical trial.

Dr. Stephen M. Smith forwarded to WND an email he received Friday from the leadership of the infectious disease division at Saint Barnabas Medical Center in Livingson, New Jersey. The co-chair of the department, Dr. Lincoln Miller, announced the new policy to physicians, citing the recommendation of the hospital's Pharmacy and Therapeutics Committee.

"I have never heard of a hospital doing something like this," Smith told WND late Friday.

"It goes against all my understanding of medical ethics in research," said the physician, a graduate of the Yale University School of Medicine and a former research scientist at the National Institute of Allergy and Infectious Diseases under Dr. Anthony Fauci.

"It's totally unethical. You are not allowed to steer people into a clinical study," Smith added. "That is strong-arming people."

WND reached an assistant in Miller's office who said the infectious-disease section co-chair would respond to a request for comment. But he did not call back by time this story was published. A member of the committee that made the recommendation, Alison Brophy, the assistant director of pharmacy for the hospital, also could not be reached for comment.

Smith said he has been under pressure for some time from management at Saint Barnabas to stop prescribing hydroxychloroquine and azithromycin to his patients. But each time he was pressed to stop, they backed away.

Now, he said, the hospital is inhibiting the use of a protocol he and many physicians have found to be effective and is backed by controlled studies worldwide, including a French study. Conflicting studies cited by media, he argues, vary widely in dosage and many other factors, making comparisons impossible.

"It's never happened before," he said of the new hospital policy. "It's a bad sign for medicine going forward."

He will continue to administer the protocol to patients at the clinic he directs in East Orange, New Jersey, the Smith Center for Infectious Diseases and Urban Health.

In an interview with WND on Wednesday, Smith expressed his frustration with the politicization of the issue and the disconnect between the scientific data on hydroxychloroquine and the statements of scientists, media and politicians who have access to that data.

Miller informed members of the infectious disease team that, in a meeting Monday, the committee reviewed FDA drug safety communications regarding hydroxychloroquine use for COVID-19.

In a memo provided to physicians, the committee said it recommended "that patients with COVID-19 receive treatment with hydroxychloroquine only as a part of an investigational study."

Miller, in his email, said that only "after confirming that a patient is not eligible for the study will orders for hydroxychloroquine be verified for non-investigational use."

"It's one thing to say you cannot get access to a drug that is not FDA approved," Smith told WND. "This is drug has been approved by the FDA."

And further, he argued, "more than half of what we do is off-label," including the main therapies for pneumonia and endocarditis.

"It's a huge infringement on the patient's rights and the doctor's ability to practice medicine," he told WND. "It's basically taking medicine out of his hands. I've never seen it."

On its website, the FDA "cautions against use of hydroxychloroquine or chloroquine for COVID-19 outside of the hospital setting or a clinical trial due to risk of heart rhythm problems."

In the interview Wednesday, Smith pointed out, however, that in the 400 clinical trials on hydroxychloroquine the FDA has approved, not one requires EKG monitoring.

The drug has been used to treat malaria since 1955 and is commonly used for lupus and rheumatoid arthritis patients.

Smith's contribution to the president's highly controversial enthusiasm for the drug was recounted in a Washington Post story reporting that immediately after Smith gave a detailed presentation at the White House on April 3, Trump ordered the delivery of mass doses to coronavirus hot spots such as New York City and New Orleans.

But that is precisely how Smith sees many of his colleagues reacting to a drug he argues has been shown in studies worldwide and in his own practice to be a safe and effective treatment for COVID-19.

But resistance has only intensified since then.

Smith addressed a study published Friday by The Lancet of nearly 100,000 coronavirus patients that concluded there was no benefit in treating them with hydroxychloroquine and its more toxic cousin, chloroquine, and even increased the likelihood of them dying in hospital.

He asked why the majority of patients studied had been admitted to the hospital when the vast majority were not hypoxic, a condition in which the body is deprived of oxygen, and had a normal qSOFA score. The latter typically measures organ function during a stay in an intensive care unit.