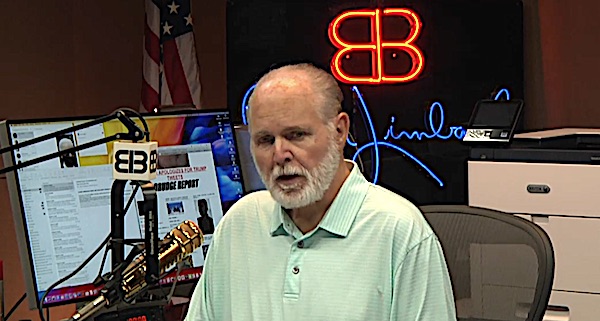 Radio host Rush Limbaugh, who is battling advanced lung cancer, says the latest wave of treatment is leaving him "virtually worthless" and that "just waking up is a blessing."

"There have been many cycles, but this is the third wave, and this current wave, I have to tell you, is kicking my a**," Limbaugh said on his national broadcast Tuesday, his first on-air appearance since Thursday.

"For the last seven days, I have been virtually worthless, virtually useless. I haven't left the house. I haven't done much of anything except just try to rest and relax."

The 69-year-old talk-show star noted he was well aware such harmful effects might occur.

"Nothing is happening that was not told me to me," he explained.

"It's the cost. It's the price that you pay if you make the decision to go ahead and do treatment to try to prolong your life. I'm doing extremely well, all things considered, the fact that I'm even here today.

"Every day, I wake up and the first thing I do is thank God that I did," Limbaugh chuckled. "Just waking up is a blessing."

Limbaugh repeated his intention to do his top-rated program as often as possible.

"My attitude is this, and the reality is, the day is gonna come where I'm not gonna be able to be here. I don't know when that is – and I'm hoping that it is months, years. 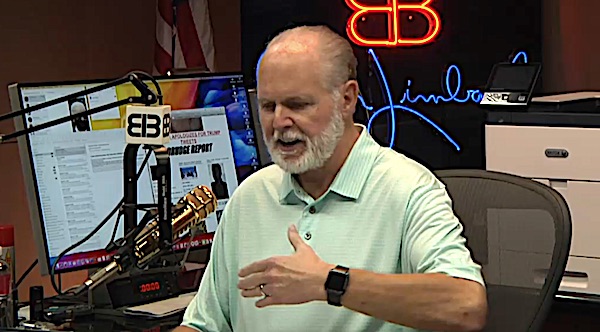 "I'm hoping that the current cycle that we're in does its magic and starts working on the tumor as the clinical trial drugs did. But regardless, the day is gonna come where it isn't gonna be possible to be here every day – and who knows? It may not be possible to be here for three hours every day. I think I'll be fine today. So I look at this: Any chance to do the show, I'm gonna take it."

He indicated he didn't wish to divulge too much information about his health condition, as everyone knew there was a "toxic component of this:"

If I were to go into much greater detail, you know, the media would start researching everything I said. There would be exposes on what I said, investigations into what I said and whether I was being truthful. I just don't even want to tempt them with it. But I guess the most accurate thing to say is that I've just now begun Week 2 of this third cycle, and each cycle is three weeks, and the impact on the tumor in these three weeks is not expected to be significant.

It's supposed to take a little longer than that. There has been one particular kind of treatment that works in 97% of patients and did not work in me, and it's because of a 1% mutation I have that led to my lung cancer in the first place. That 1% mutation is theorized to nullify the second phase of treatment that we tried, throughout…

Even in the first phase where I was in the midst of a clinical trial – stage two of a clinical trial, not even stage three, and these are relatively brand-new drugs. These are the drugs that kept me out of here for two weeks and I didn't even know where I was. They did a number on the tumor. They shrunk the tumor and related effects. But it would have killed me if I'd have stayed on it.

I would have lost vision in my right eye. I was unable to walk for four days because of muscle swelling and pain from the waist down all the way to the tip of my toes. So I had to get off that stuff. I was on that stuff for I think four weeks, and it bought some time for the next phases to begin, which we are – I am – now in, and I just keep plodding away each and every day.

Limbaugh, who was awarded the Presidential Medal of Freedom during President Trump's State of the Union address in February, said he could not be going through this without the loving support of his wife, Kathryn.

"I have never experienced anybody so selfless," he said. 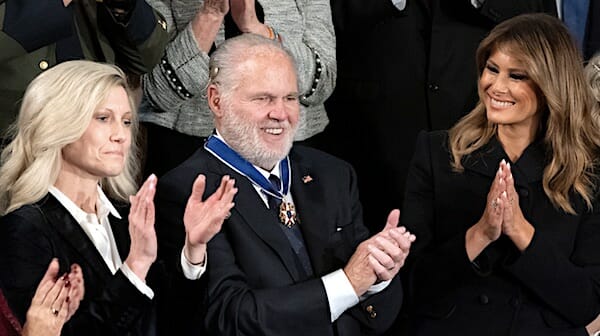 "I marvel at her selflessness. I don't know how she does it. This is as devastating for her as it is me. But she doesn't allow herself to get down – or, if she does, I don't see it. She has this ability to immerse herself in other people's sadness and disappointment and make them feel better. And not with pep talks. Not with things like that.

"Just by virtue of her countenance and her being. She is able to appear optimistic, happy. I mean, bouncy on occasion. No complaining. Which is such a blessing, 'cause I don't know how to deal with people that complain, since I don't complain much. But the things that she is doing to ease me through this and to make it as less arduous for me that it can be, I'm blessed."

What is going on in today's news? Every day more and more politicians across America – especially blue-state governors and mayors – are suddenly acting like full-blown dictators. It's all exposed as never before in the latest issue of Whistleblower magazine, titled "DRUNK ON POWER: Pandemic crisis reveals many politicians' love affair with totalitarianism."