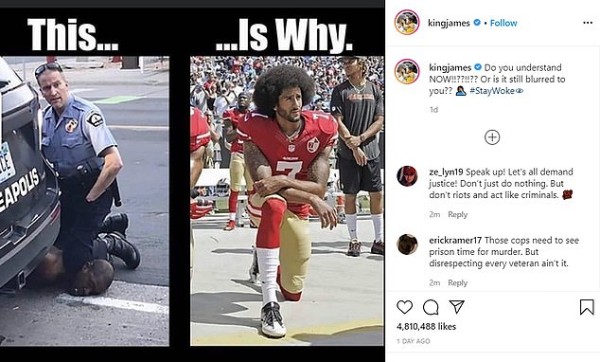 Colin Kaepernick, the former San Francisco 49ers quarterback known for launching the national anthem protest, said Thursday that civility has run its course, and revolution is "the only logical reaction" to the death of George Floyd in Minneapolis.

"When civility leads to death, revolting is the only logical reaction," Kaepernick tweeted Thursday.

Horrific video of the death of Floyd on Monday led to the firing of four Minneapolis police officers. It showed one officer, Derek Chauvin, kneeling on Floyd's neck as he cried for help, saying he couldn't breath.

Floyd, 46, passed out and was declared dead at a hospital. He had been arrested for using a forged $20 bill at a deli.

Along with Chauvin, the fired officers were Thomas Lane, Tou Thao and J. Alexander Kueng.

The FBI is investigating the death for a possible civil rights violation.

Wednesday night, a protest in Los Angeles shut down the 101 freeway, and a suspected looter was shot dead amid rioting in Minneapolis. Stores such as Wendy's, Target, Walmart and AutoZone were looted and ransacked and some were set on fire. An apartment building burned down, and a woman in a wheelchair was punched in the head and sprayed with a fire extinguisher after trying to block protesters.

'There are bodies in the street'

NBA superstar LeBron James posted on Instagram a photo of Kaepernick kneeling during the national anthem in 2016. The Post, showing the Minneapolis officer with his knee on Floyd, said such incidents were why Kaepernick took a knee.

Kaepernick has said the anthem demonstrations were in protest of an alleged systematic, racially motivated campaign by white police officers to harass and kill African-Americans.

He began in the preseason of 2016 by sitting down during the national anthem before a game, later explaining he was "not going to stand up to show pride in a flag for a country that oppresses black people and people of color."

"There are bodies in the street and people getting paid leave and getting away with murder," he told media.

African-American columnist Larry Elder, who criticized the flag protests, cited studies from mainstream sources showing, among others, a 75% decline in police killings of blacks since 1968 and the rarity of police shooting of an unarmed black male.

African-American scholar Shelby Steele, who grew up in the segregated South, wrote in the Wall Street Journal that while there is still racism in America -- because it's "endemic to the human condition, just as stupidity is" -- the U.S. has come to a point where racism "has become anathema and freedom has expanded."