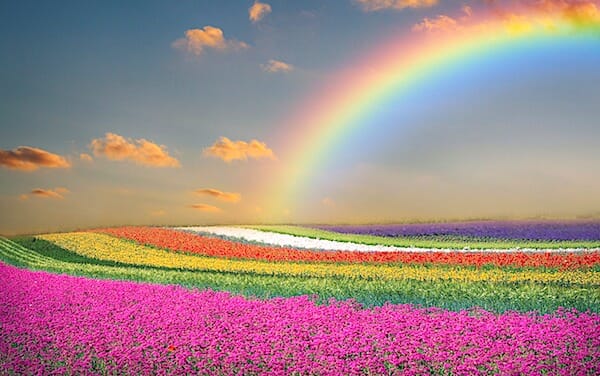 The rainbow is described in the book of Genesis as a symbol of a promise by God.

For thousands of years since then, it's been a universal symbol of hope and peace.

In just the last few decades, LGBTQ activists have adopted it as a symbol of diversity.

But when a rainbow-colored flag was displayed as a "thank you" to National Health Service workers in Britain during the coronavirus pandemic, that was too much for LGBTQ activists, noted the U.K.'s Christian Institute.

One LGBTQ activist complained that some businesses using the rainbow symbol as a logo "would refuse to hang a rainbow flag outside their business during Pride Season."

He claimed the LGBT community was being "belittled by the meaning of the rainbow being changed in the current climate," the Christian Institute said.

"There are many other ways to show your support for the NHS rather than using a symbol that has an alternate meaning for a large portion of the population."

Another complained, "It’s worrying that the universal symbol of the LGBT+ community might be being 'overtaken.'"

Last month, the group Warwickshire Pride asked its Twitter followers: "Do you think the current use of the rainbow to celebrate the NHS will mean the message behind the rainbow badge is lost?"

In a column for Forbes, Jamie Wareham, who reports on "LGBT life, identities and being queer," admitted the rainbow has been a symbol for other communities for millenia.

"Not least in Christianity where the rainbow denotes God's covenant – a connection between God and all living creatures – with Noah," he wrote.

Wareham quoted a man identified as James who said he finds it frustrating that the LGBT flag has been repurposed to support the NHS.

"Those are the people who are actively trying to steal our flag, in my opinion," he said.

One Twitter user said: "It feels like those that fought and campaigned for us to have a symbol of solidarity, are being belittled by the meaning of the rainbow being changed in the current climate. We've fought so long for a place in the world. I feel that this has weakened our power and stance within the country and world."