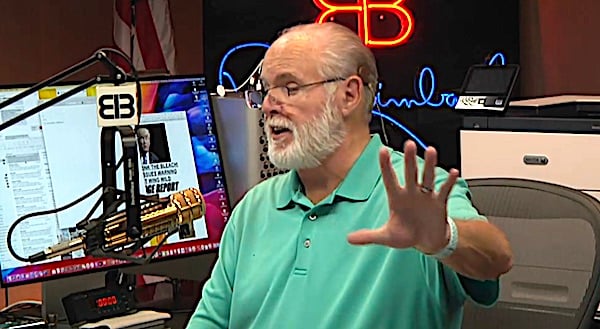 PALM BEACH, Florida -- Will Joe Biden even be on the Democratic presidential ticket by Election Day?

The answer is no, according to radio talk-show host Rush Limbaugh.

"Biden is somebody that's not gonna be on the ticket anyway. Something's gonna happen," Limbaugh said on his national broadcast Monday. "They can't possibly go into the race with the guy on the ticket. ... At the highest levels of the Democrat National Committee, they know that Joe Biden has got to go. Nonstarter."

Since the onset of lockdowns due to the coronavirus pandemic, campaign events have been put on hold, and Biden has been doing interviews from his own home. But even if there were no lockdown, Limbaugh says having Biden campaign in public is dangerous for Democrats.

"And he's not gonna have an answer that he can remember. He's not going to have an answer that will put it to bed, so to speak. So they're faced with a hard, cold reality on the Democrat side, and that is they have to find a way to get him off the ticket. But he's got the delegates."

Limbaugh says while some on the political left want Biden gone, there are others who would never want him off the ticket.

"The people behind Plugs [Biden], the people who want Plugs to be president, those are the people who are having dreams about all the presidential power they will have. They don't want anything happening to Plugs," he explained.

"You know, Plugs has his Kitchen Cabinet, this silent bunch of people behind him that, in their minds, they're gonna actually be the ones running the country 'cause Plugs is not gonna know where he is day to day. And I'm not even saying that trying to be humorous. It is a fact."

Limbaugh said he could not overemphasize how much the Democrat Party and the media want to be done with President Donald Trump.

"Getting rid of Donald Trump is even more important than winning the White House" in their minds, he stressed.

And then, of course, there's the party hatred. They hate anybody who has the White House when they don't. They hate Republicans institutionally. But it's a two-pronged hate with Trump, and it's guiding everything they do. Getting rid of him, whether it be impeachment, whether it be the Trump-Russia scandal, whether it be, anything – Stormy Daniels, Michael Avenatti, you name it – that has been their sole agenda.

And it remains! Even with the coronavirus, even with COVID-19, their number one objective is not to find a way to protect the American people, not to find a vaccine, not to find a treatment. No. They don't think there's any political future in that.

Their political future is devoted to getting rid of Donald Trump. They've got to do that. You can't, I don't think, imagine it. I don't think you hate anybody to the extent they hate Trump, so you have a tough time relating to the kind of hatred that I'm talking about. But it's all consuming.

And it has ramped up! As each effort they have engaged in to get rid of the guy has failed, their hatred has intensified. Their anger at ... They've launched every weapon they've got. They have done everything they know. Everything they've tried that has ever succeeded getting rid of a Republican, they've tried it on Trump.

And he's still strutting around, smiling and laughing and making fun of 'em. And he's still president, and he's still running the country. And they know he's still gonna get reelected because they know Plugs Biden doesn't have a prayer. In that regard, they're a little bit dangerous in the sense that we can't count on them for anything useful or productive where this virus is concerned.

So they are worthless to the effort that the nation has engaged in to deal with the coronavirus. They're not helpful at all. In fact, it's worse than "not helpful." They are attempting to undermine the efforts that others are engaged in that might succeed in finding a way to deal with this, either therapeutically, a vaccine, what have you.

Regarding the #MeToo movement blowing the whistle on sexual harassment, Limbaugh said it was never designed to be used to target Democrats:

"The entire political #MeToo movement was designed for Republicans. And if you doubt me, just take a look at the hard work being engaged in here to make sure it is not applied and not used and not attached to Joe Biden in any way."