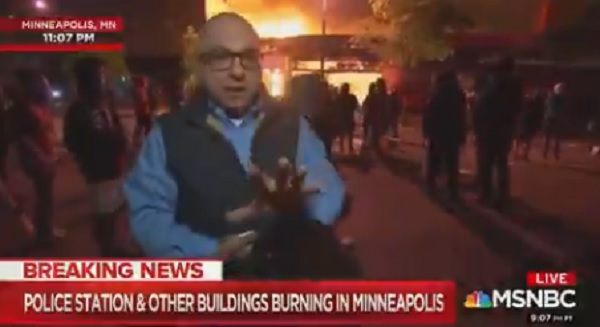 With a building ablaze in the background, an MSNBC journalist reporting live Thursday night on the uproar in the Twin Cities in reponse to the death of a 46-year-old black man insisted he was witnessing "mostly a protest" that was not generally "unruly."

"For most of the day, today, it looked a lot calmer than yesterday looked," Ali Velshi began his report. "And that's what happened yesterday. It picked up later in the evening. The crowds gathered here and the standoff with the police looked very different last night."

Velshi, however, acknowledged four fires in the area, including in a liquor store and the 3rd Precinct police building.

"I want to be clear on how I characterize this. This is mostly a protest. It is not, generally speaking, unruly but fires have been started and this crowd is relishing that," Velshi told anchor Brian Williams. "There is a deep sense of grievance and complaint here, and that is the thing. That when you discount people who are doing things to public property that they shouldn't be doing, it does have to be understood that this city has got, for the last several years, an issue with police, and it's got a real sense of the deep sense of grievance of inequality."

"This will guide our reporting in MN. 'While the situation on the ground in Minneapolis is fluid, and there has been violence, it is most accurate at this time to describe what is happening there as 'protests' -- not riots.'"

George Floyd died Monday after a white police officer kneeled on his neck as he was being arrested for alleged forgery. The officer and three of his colleagues were fired after a video of the incident indicated Floyd did not resist arrest. No criminal charges have been fired but a federal investigation is underway.

Why you shouldn’t let liberals anywhere near the levers of power, in 12 seconds: pic.twitter.com/RclcSOypb3

Noted constitutional law authority Jonathan Turley wrote on his blog that it was MSNBC host Craig Melvin who issued a "guide" that the images "on the ground" are to be described as "protests," not rioting.

"That framing has been used on other networks, including some segments where the reporting seems bizarrely out of sync with the scenes in the background," he explained.

He noted, "The looting and destruction is also a major part of the story as is the storming of a police station and burning it. The effort to avoid referring to the rioting raises questions about the editorialization or shaping of the news. There are not a lot of ways to refer [to] the looting and burning of businesses like Target.

He noted the word rioting, and what it means, is pretty clear.

"'Arson' could be called 'combustive demonstrations' but it does not really convey the scene. Likewise, 'looting' could be referred to as 'unpurchased advocating' but it does not capture the scene of men breaking open cash registered with hammers or pictures of stores being picked clean of everything from big screen televisions to garden tools."