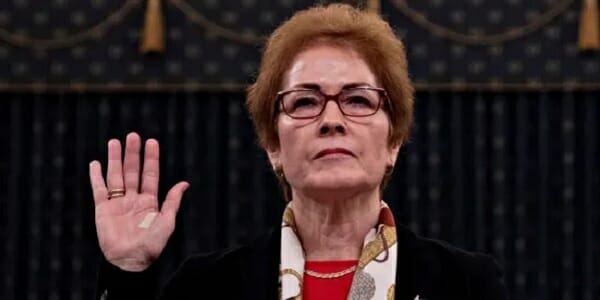 During House Speaker Nancy Pelosi's partisan impeachment effort, Democrats repeatedly insisted there was no corruption in Hunter Biden's profiting from a Ukrainain gas company while his father, Joe Biden, was overseeing U.S. policy for the European nation.

Former U.S. ambassador Marie Yovanovitch claimed under oath she knew little about the conflict of interest beyond an initial briefing and various press reports about the Ukrainian firm, Burisma. Under oath last October, she said it "just wasn't a big deal."

However, Just the News investigative reporter John Solomon reports Yovanovitch had discussions and meetings about Burisma in 2016 as the company tried to clean up its image.

State Department records of the discussions filled more than 160 pages of emails, memos and correspondence at that time.

Solomon cited memos among the federal records obtained under a Freedom of Information Act case by the group Citizens United.

They show Yovanovitch was warned in September 2016 in an email by her top deputy that Burisma had hired an American firm with deep Democratic connections called Blue Star Strategies. Bursima's aim, a memo said, was to "rehabilitate its reputation," and it it had placed "Hunter Biden on its board."

The former ambassador also did not mention in her impeachment deposition that she met with a Burisma official in her embassy office just before President Trump took office.

Among the records was a private letter hand-delivered to Yovanovitch by a Burisma lawyer in September 2016. Others documented a briefing from her staff just weeks later and a meeting with a Burisma official just as Obama  was leaving office, Just the News reported.

Neither Yovanovitch nor State Department officials responded to requests from Just the News for comment.

"These new records clearly don't support Ambassador Yovanovitch's testimony under oath during [Rep. Adam] Schiff's sham impeachment," David Bossie, the chairman of Citizens United, told Just the News. "Her sworn testimony must be investigated and scrutinized just like in the case of General [Michael] Flynn. You can't have two sets of rules."

During Pelosi's impeachment drive, Democrats criticized efforts by Trump and personal lawyer Rudy Giuliani to investigate the Bidens and to remove Yovanovitch from her post.

Burisma, at the time, was being investigated in Ukraine for corruption, and many viewed the Bidens relationships to Ukraine a conflict of interest.

But Yovanovitch's testimony "made no mention of direct contact with Burisma representatives," the report said.

Her response to a question what she knew about Burisma was: "Not very much. And, again, that happened before I arrived."

Solomon noted that during a televised impeachment hearing, she doubled down on her claim that Burisma and Hunter Biden weren't on her radar.

"But the memos show Yovanovitch was informed that the criminal cases were actively being settled in fall 2016 and that Burisma and its founder Mykola Zlochevsky were trying to repair the company’s reputation with the U.S. Embassy," the report said.

Just the News noted Fox News last November challenged her denial that she had contact with a Democratic House staffer, pointing out emails document the contact.

Solomon reported Blue Star Strategies and another group, Atlantic Council, were involved in lobbying the U.S. Embassy in Kiev to drop its characterization of Burisma as corrupt.

Just the News quoted from a number of communications with the embassy about Burisma.

In one, an embassy official told Yovanovitch, "This is further to the Blue Star effort to rehabilitate the reputation of their non-client in the U.S., former ministry of ecologies Zlochevsky, who clearly has retained the services of a blue chip law firm (Cravath) and his energy company Burisma, which in turn has Hunter Biden on its board."