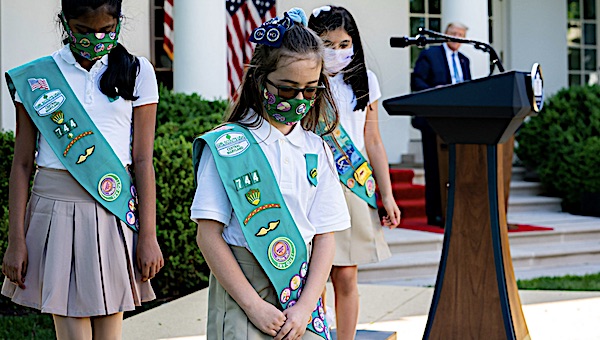 President Donald J. Trump listens as members of Girl Scout Troop 744 of Elkridge, Maryland, deliver their remarks at the Presidential Recognition Ceremony: Hard Work, Heroism and Hope on Friday, May 15, 2020, in the Rose Garden of the White House. (Official White House photo by Tia Dufour)

The World Health organization has adopted a resolution calling for an "independent" review of its response to the Chinese coronavirus pandemic, just as President Trump is warning that the organization needs to document its independence from China or lose U.S. funding.

The Washington Examiner reported WHO members unanimously approved an "impartial" look at the agencies early actions regarding the coronavirus pandemic amid allegations it helped China cover up its severity.

Trump on Tuesday said he will permanently pull U.S. funding from WHO if the organization fails to "commit to major substantive improvements in the next 30 days."

Trump wrote: "It is clear the repeated missteps by you and your organization in responding to the pandemic have been extremely costly for the world. The only way forward for the World Health Organization is if it can actually demonstrate independence from China."

His letter was to Director-General Tedros Adhanom Ghebreyesus.

Trump said his administration "has already started discussions with you on how to reform the organization."

"But action is needed quickly. We do not have time to waste."

He said the U.S. has the option to "reconsider our membership."

The resolution adopted by WHO was in the works before the president's letter. It is the result of a weeks-long effort by Australia to seek a review of the WHO's actions. Also supporting the effort were the European Union, a coalition of African nations and the United Kingdom.

The call to action, seven pages long, was adopted without objection by the 194 state members of the organization at its 73rd World Health Assembly, a virtual meeting.

It requires Tedros to "initiate, at the earliest appropriate moment, and in consultation with member states, a stepwise process of impartial, independent, and comprehensive evaluation ... to review experience gained and lessons learned from the WHO-coordinated international health response to COVID-19."

The Examiner explained: "There is evidence that China covered up the coronavirus's spread, muzzled whistleblowers, intimidated doctors, misled the WHO, and blocked outside health experts. Studies indicated that if China had acted faster, the global spread would've been greatly reduced. It was reported that China knew around late December that human-to-human transmission was occurring, but on Jan. 14, the WHO tweeted that 'Chinese authorities have found no clear evidence of human-to-human transmission.' Tedros and the WHO have repeatedly praised China's coronavirus response."

Experts have suggested that the coronavirus might have escaped from a Wuhan biosciences lab, not from a nearby market for exotic meats as has been speculated.

China has blocked almost all inquiries into the issue.

Chinese President Xi Jinping said the investigation is a good idea, but it should be led by the WHO officials whose actions were being questioned.